2D Game has very bad lag because of one script?

I am making somewhat of a flappy bird clone (mostly for practice) and everything works fine, but it is just really slow with a low FPS of 13 and a max FPS of 28. Why would this be?

So I ran a check with the unity profiler and it turns out that my MoveLeft script which I am using to reuse my obstacles is taking up 73% of the CPU. I have it attached to each of my 6 prefabs, which include 2 long obstacles and a token (to collect) in middle each. The game works by moving the prefabs along the camera, then moving them back after they pass the camera.

Here is the script:

I really want to fix the lag. What can I do? I am sure this is the script causing it, but without this script my game does not work. Thank you! All help is appreciated!

Hierarchy (objects that I am moving with MoveLeft script. Script only attached to tree parents)

And a scene view that displays colliders found in prefabs 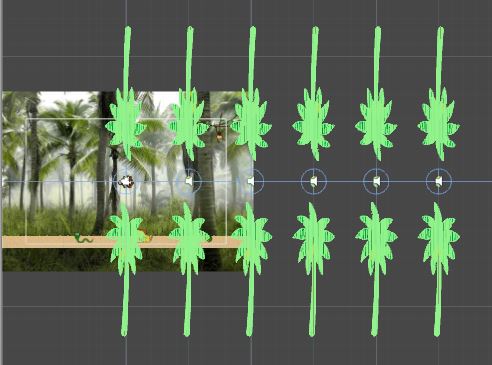 Profiler with information regarding my MoveLeft script

Performance problems are tricky to diagnose remotely, but the fact that your palm trees turn almost solid green when selected is a probable clue.

If you started with a nice high-resolution image, Unity probably generated PolygonCollider2D data like what you see on the left: trying to capture each frond in exacting detail.

But if you're making a flappy bird clone, that detail is wasted. If a player ever ends up between those fronds or below the crown they're screwed anyway, so you don't need pixel-perfect collisions there. You could manually tweak the points to get something like the one in the middle, or replace the PolygonCollider2D with a simple EdgeCollider2D chain like the example on the right, for virtually identical gameplay.

Why does the polygon count matter so much?

When it comes to physics and collision tests, checking against a mesh of polygons is one of the most expensive things you can do. Circles/spheres and other primitives like boxes are generally a lot faster than similarly-shaped meshes, so you'll want to avoid polygon meshes whenever you don't need vertex-for-vertex fidelity, or at least try to keep the number of polygons/edges as low as possible.

But wait, why is the game even doing detailed collision calculations for these trees when the player is nowhere near them?

Because of this line:

Physics objects, including colliders, are happiest when they're moving using physics (like Rigidbody2D forces & velocities). That lets the physics engine make good predictions about where they're going and what they might hit along the way, so it only checks for the minimum number of collisions each step.

When you Translate a physics object like a Collider, from the perspective of the physics engine it's just teleported, and could potentially be anywhere in the scene, intersecting with any other body. So suddenly its predictions are out the window and it needs to do more exhaustive checks and updates to make sure it safely handles even the worst teleportation cases. Any clever acceleration structures it had for speeding up checks against this object are now invalid too and need to be rebuilt - this is especially expensive for static colliders (ones with no Rigidbody/Rigidbody2D) as the physics system assumes these will never move. All that work is what's spiking time in your update function.

So, your best bet fixes, with the biggest performance wins first:

If I understand correctly, I believe the transform function calls a GetComponent with it every time, which could spike CPU in an Update function. Is it attached deep in a parented hierarchy on the prefabs? (i.e. a child, in a child, in a child and the scripts are attached there?)

Try something like this and see if it helps

Not the answer you're looking for? Browse other questions tagged unity c# performance lag or ask your own question.

2
Lag compensation in rocket game context
0
JVM voxel game engine lag spikes
0
Showing Frame Rate Info in the Unity scene using Custom Script failed
1
How to completely stop the camera from clipping into the ground
0
IndexOutOfRangeException on array of transform prefabs in Unity
0
Draw onto an object's texture based on a raycast hit position in world space
0
How to apply Time.timeScale only to certain scripts?