I have a very simple app which removes buttons and re-adds buttons to certain layouts when a button is clicked. The problem is, this process is taking a very long time. My question is: How can I make this process faster

I have a simple program which swaps two buttons:

Now, the problem is that I want the buttons to swap places right after I click on a button. Instead, the program is taking about three seconds to do the above four tasks after I click the button.

So, having done my research, I learned that one thing that may be slowing me down could be the fact that the main UI is handling all of this work. So, I decided to put all of this code inside of a thread to run in the background:

But putting this code in a thread gave me another exception. This is probably happening because I am trying to update the UI (remove and add buttons) from the thread.

So, I don't know how I should approach this problem, since I do need to change my views...

Another thing that could be slowing down my app (from the research I did) is that my layout might be inflating after a while, due to such a giant layout. My layout is pretty big, so that may be it: 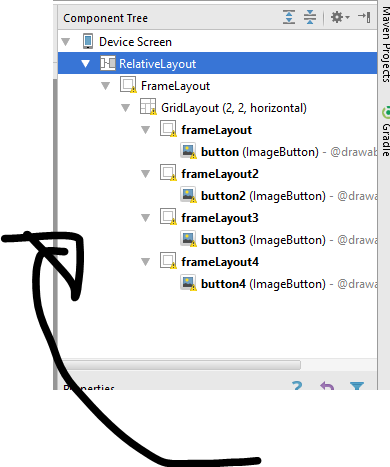 I doubt it is the layout though, as the screen loads pretty fast. What happens is that when I click a button, the screen freezes for three seconds, and then updates the UI with the completed tasks.

Could I somehow take up more memory to be faster as an app? The whole basis of my app runs on being able to complete those four tasks and update the UI as soon as the user presses on a button. What else should I do? I have also added this line in my manifest after looking at similar questions:

Now, what else should I do? Thanks so much for your help, I really appreciate it. I have been stuck on this all day...so I really (REALLY!) would like any feedback.

Thanks so much for your time

1
Android app: adding background, styles, custom buttons
1
How to switch between views in android?
0
onTouchEvent only working for one view within activity
3
How to make “Shaky mouse cursor” Before shoot the target Like in a Dart Game?
5
Fixing the size?
1
How can I move my button?
2
Prevent button layout changing after one is removed?
0
Unity tilemap tiles animation