Help with building a platformer engine on top of cocos2d [closed]

Ask Question
Asked 6 years ago
Active 6 years ago
Viewed 164 times
1
\$\begingroup\$
Closed. This question needs to be more focused. It is not currently accepting answers.

I am a C# programmer making a transition to game programming and hence C++. I want to make a reusable platformer engine (for now I want to start small) on top of cocos2d/box2d to make prototyping of new ideas easier.

My idea is nothing new, I want to use a component model to be able to build game objects by various blueprints. My biggest problem is the implementation of my idea as my c++ skills aren't great.

The idea is that every game object is a composition of raw data and behavior/actions where raw data is expressed as set of components eg. "VisualComponent", "PhysicsComponent" etc.. and actions defines the "mind" of the object or what it can do: "Move","Jump","Roll","Hide" etc..

Below you can see I made simple actions/states diagram, the actions has a flow. some actions are blocking other actions while their in progress. This is the notion I want to have with this engine. A set of actions or behaviors that plays nicely together. actions should be stacked if possible so shooting while moving/jumping is allowed. But shooting while rolling isn't allowed hence rolling is a blocking action. (I'm not talking about reactions yet but it is too a concern).

Ok, so back to the GameObject here is what I want to achieve. 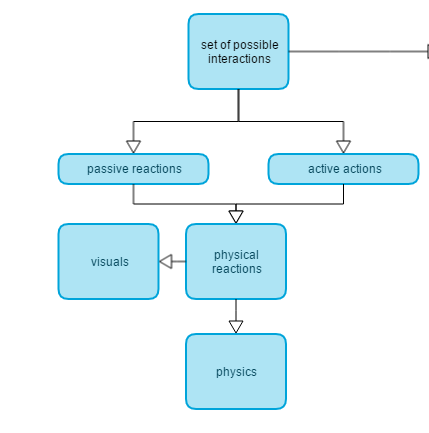 here is a theoretical example of what I want to be able to do (pseudo): it's me talking to the engine if it was a human.

Hardest part for me to think about is how to keep actions intact with the specific components they affect. And how to add more logic without making this model a monstrous thing. Let's say I have jump now I want to be able to give my character double jump it's hard for me to visualize how it can be done without serious changes each time that can mess with the flow" of actions/states. Furthermore it's really hard for me to think about reactions logic cause that's not even controlled by the object itself.

I will be happy to hear your thoughts and ideas of this model. If it's outdated or totally crap I'd like to here it too. Mostly I'd like to hear about how you would implement such system.

Browse other questions tagged architecture game-theory or ask your own question.

6
Entity system in Lua, communication with C++ and level editor. Need advice
21
How to implement behavior in a component-based game architecture?
0
How far do I take Composition?
11
How to structure game states in an entity/component-based system
11
How to avoid "Blob-Systems" in an entity component system?
4
Separating components and logic
0
How to use Bullet physics with Entity Component Systems?
4
Game Engine "Control Flow" Design Options?