I have a spacecraft (shown in the image) built out of ‘blocks’ / 3D planes. It is drawn within a 3D space, but I’m ignoring the Y axis for now and keeping things on a “2D” XZ axis. 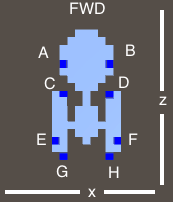 The ship has a number of thruster blocks (represented in blue); each of which should fire depending on user input (does the user want to go forward? or turn left? etc).

Although the image doesn’t show it, each thruster is oriented in a logical direction; i.e the thrusters labelled A & E point left, B & F point right, thrusters G & H point down, thrusters C & D point up.

Thrusters are placed arbitrarily around the ship. There is no actual 'Thruster A' or 'Thruster B'; I'm just using the spacecraft in the above image as an example.

I already have the following which works for forward/backward thrust and strafing (in pseudo code):

My problem lies in determining which thrusters to fire to turn the ship.

I’ve done a lot of googling on this and have found quite a lot of info already. I.e:

However my maths/trig skills are - to be blunt - crap and so I’m hoping to get a somewhat simpler explanation or even some code to help me understand and solve this problem. I'm not aiming for superbly accurate physics, just something that is fun to play.

If you know the center, you have to find out if the thruster is above or below and left or right of your center.

Now you just need to know the force with which to fire, but that's a different question.

Not the answer you're looking for? Browse other questions tagged unity physics-engine or ask your own question.