What I am trying to do is to create a Rubik's Cube game using LWJGL in Java. I have a lot of it done already, the only problem is the rotating. It just isn't working. I've tried multiple ways of rotating the cube but none of them seem to be working. Here's an image of what I've done so far: 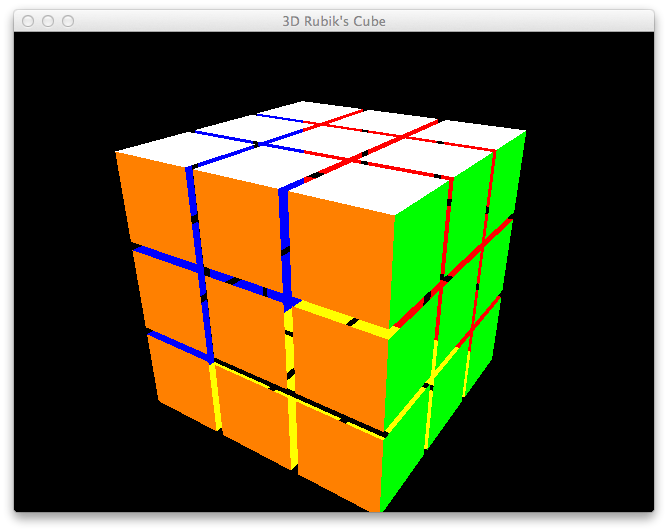 It works fine as you can see. Now if I rotate the front slice, it also works well. 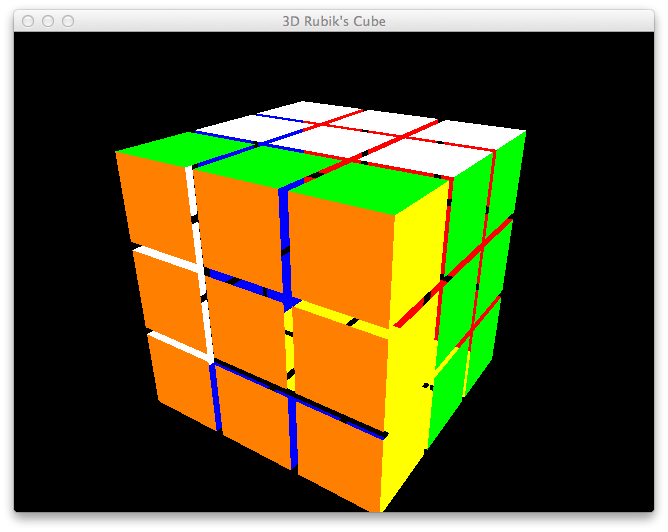 It seems to be messing up when the rotation is more that one. What I mean by that is when I rotate "F R D", this is front, right, and down. Like so: 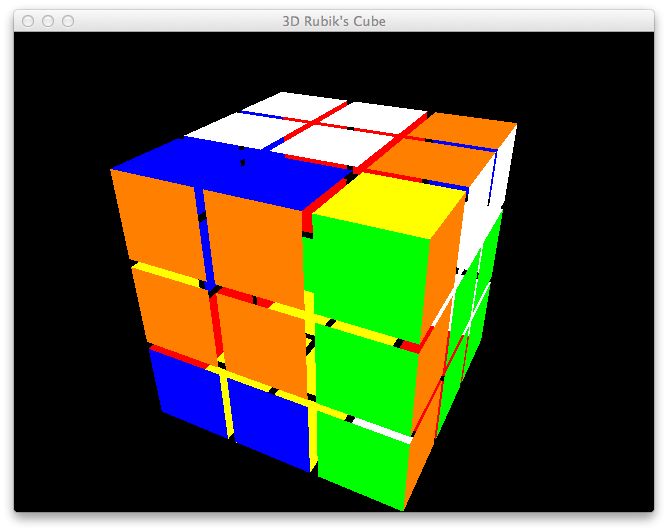 But the problem occurs when I rotate the front side one more time, the rotation completely messes up: 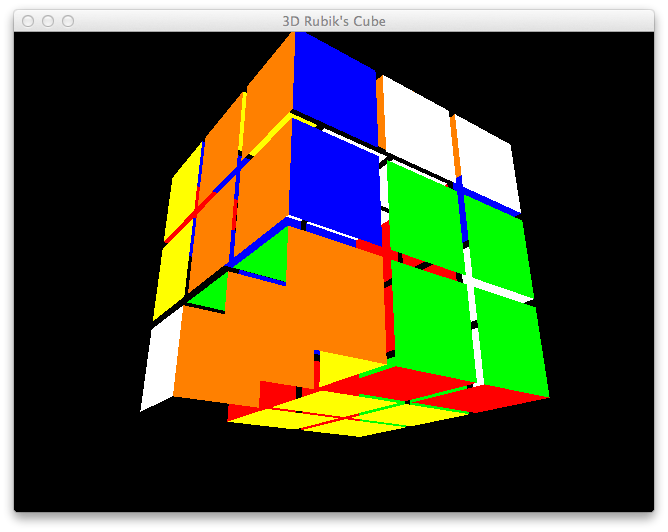 As you can see, the cube rotates the wrong way. I don't know how to fix this.

What I've tried is calling three separate GL11.glRotatef( ... ) functions but that hasn't worked. I've tried storing the rotations in a Matrix4f and then GL11.glMultMatrix( ... ) and that has had the same output. I finally gave up and settled on this code here:

I am at a loss now. If you need the variables and code up there defined: realRotation is a javax.vecmath.Point3i instance. All it has are the values from 0 to 3. It will never be greater than three, or less that zero. This is also the same reason why I am multiplying the values by 90 to rotate it 90 degrees each time. The quads array is just for rendering, it doesn't matter and has not caused a problem. Now the pos variable is an enum value that I have created to keep track of all the pieces in the game and where they are. Again, probably not the problem, but I don't know. It just might be the problem.

EDIT #1: I still haven't found any answer to the problem. The only other idea that I have gotten is that I can manually set the rotation to what it is actually supposed to be. I assumed that this will be EXTREMELY tedious and inefficient, so I've left that as a last resort. If I'm incorrect about this method, please feel free to let me know. I have a deadline for this project and I haven't gotten any progress beyond this.

EDIT #2: I have had an (I think) epiphany! I believe the problem for this peculiar rotational behavior is the cause of the Gimbal Lock. This is when an object is rotated in an axis, and the other axis pretty much becomes useless because of the previous rotation. This is explained very well with this GIF:

As you can see, once the plane is pitched to a 90 degree angle, roll and yaw are seemingly the same because of the pitch's rotation. On the wikipedia page, it is stated that a solution to this would be to use Quaternions, or so. I have not worked with Quaternions too much and still would like to hear if anyone has anything to say about this. I'm just guessing that this is the problem.

EDIT #3: After hours of studying and looking for an explanation as to what is going on. I have come up with nothing. I have still not solved the problem and I think I might have even made it worse. The code I have to render each cube is as follows:

Again, this isn't working and I (once again) am absolutely clueless. The page I am looking at to figure out this stuff is this page. Don't even know if it's right. I got it from my Physics teacher who is also working on Quaternions. Once again, I have a deadline for this project and I would love it if I can get this done by then. I am willing to accept anything anyone says, I really need a lead on this. I keep hitting walls after walls.

Quaternions can't suffer from gimbal lock; they are functionally identical to full matrix multiplations. However, the angles you use to generate them can be wrong.

The problem is that you are generating your rotations around fixed angles, in your case Cartesian unit vectors. You can't do that; your rotation axes must rotate along with everything else. Yours are static.

Whether you're doing this:

Both are using fixed unit vectors.

Alternately, you could simply store your current orientation as a full transform matrix. Then the number of manual operations would be reduced greatly. You would still need to calculate the additional rotations on the transformed (relative) axes, but you could use that same matrix to transform them.

Not the answer you're looking for? Browse other questions tagged java rotation lwjgl .

0
LWJGL Camera Rotation Issues
3
3D 3-axes rotation into 3D 2-axes rotation
1
Transform.forward having problems after rotation
1
How can I move the camera directly under a certain plane?
0
How to pitch, yaw, roll, an object like a flight simulator in OpenGL?
0
How to rotate to look at target
0
How to use quaternions with JOML and LWJGL3
3
Pitch becomes yaw as camera gets near object
0
NVidia Physx get yaw pitch roll from rigid body orientation