After reading This SO post on Vectors, I'm still pretty confused on how to use vectors to move my entities at any angle. The SO post assumes only 90 degree angles:

Vector between a and b is: 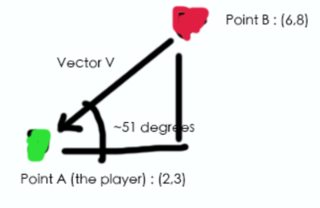 So I know the speed/length/magnitude is 6.4 "units", and the angle is 51 degrees, but now how do I apply this data to make point B actually move towards point A at that angle and correct speed?

1) First of all, let me roughly clarify a few concepts. You said:

Yes, length and magnitude of a vector can be both terms used with the same meaning. However, technically, a vector is not an angle: it forms angles in relation to something else. In your example image, the line segment going from point B to point A forms an angle of around 51 degrees in relation to the X axis.

A vector is given by a point in space (in your case, 2D space). When we think of or use a vector as a direction, it means that it represents the direction going from the origin (0,0) to that given point in space. Not a specific angle. So, in your example, the vector (4,5) that you calculated is the direction from point B to point A. And actually, as you will se, that is all we need.

In what regards speed, that's a totally different thing. By you mixing that together with length and magnitude, it is apparent that you are confounding speed and velocity, which are two different concepts. Speed is just a scalar number that represents the amount of distance walked in a given time, i.e. length divided by elapsed time. Velocity is a vector given by the direction of the movement divided by elapsed time. Hence, the current speed of a movement is the length of the velocity of that movement. For more details, see: http://www.physicsclassroom.com/class/1DKin/Lesson-1/Speed-and-Velocity.

2) That said, the way I find to be the simplest to move an object using vector math is the following. You need 4 pieces: direction, length, speed and frame delta.Time.

In detail: you have to calculate the vector direction (not the angle) and normalize it, have to use the scalar speed that you desire, and have to apply a frame-to-frame delta time for consistency across different computers. You put all that in a loop that loops while the distance between moving char and destination point (in your case, point A) is lower than the total distance between points A and B. And voilá!

Then, we normalize that vector. What does normalize mean? It only means that we take the vector "movement_direction" and force its length/magnitude to become equal 1. That's pretty simple to achieve: you just divide the vector by its length. See more here: http://www.fundza.com/vectors/normalize/. For that, we will need to get the direction lenght, just as you did:

Then, let's normalize the direction of the movement:

Now, you just choose the speed you want for your movement and you retrieve from your game engine the so called frame delta.Time, which is the time elapsed between the last frame and the current frame of the main game loop.

The final formula for the movement becomes, at each frame of the main loop while the movement is still going on:

Also note that including delta.Time is crucial, because that is the way you guarantee that you movement will have the same speed no matter how fast is the computer running the game. Otherwise, the speed would vary because of the difference in how fast computers calculate each frame of your game.

Once you have the vector (V in your diagram), you can simply normalize it (that is, make its length 1.0), then multiply it by the speed you want and add it to point B.

It's not clear to me what you're trying to accomplish, so I don't know how best to tell you to calculate the speed. If you set it to 6.4, then the target will be in the player's position on the next frame. (But the player may have moved by then.)

Once you know the speed you want, you can move B by doing the following:

That assumes you put the normalized vector into v.

Not the answer you're looking for? Browse other questions tagged game-design movement vector or ask your own question.

2
Beginner: How do I calculate a vector?

2
How to shift a vector based on the rotation of another vector?
1
2D Top down acceleration vector
5
Vector Math question
1
Making player movement direction follow players facing direction
1
Vector magnitude in orientation
7
Path following with Asteroids-like movement. Time to complete path
1
Computing how fast a vector should go toward certain direction
29
If a 3D vector represents a point, how can it have a length?
1
Issue picking the closest vector in a unique circumstance
0
Math: determining a proper procedural vector for sine-movement