How do I write a shader that lights up when objects are near a surface?

In this Overwatch gameplay video, the character's shield lights up white in areas that are near other objects' geometry. 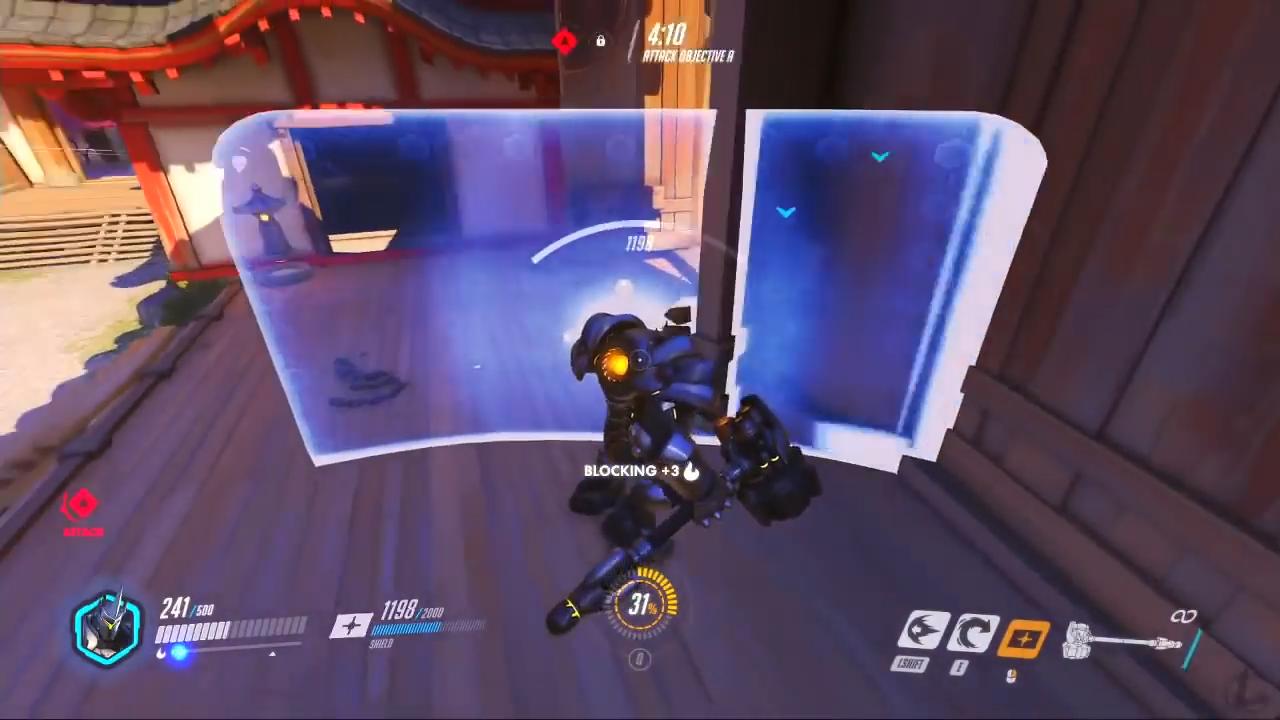 Note the white edges on the blue shield, near the floor, walls and pillar.

I believe the shield has its own model and the effect is done with a shader, but I'm lost trying to figure how to translate the concept of "nearness" to shader programming.

I wrote a simple WebGL demo of that.

Let's go over the fragment shader code in detail:

Sample the depth map at every fragment. Remember to divide by your viewport dimensions to convert your fragment from screen space [0, width/height] to normalized [0.0, 1.0] coordinates. At this point, if you simply set the fragment color to the sampled depth map pixel, it would look like this:

The depth map is grayscale, so you can get the value from any channel (I used r here).

You can then use that depth sample to find the difference between the scene depth and the depth of the shield fragment. Remember to normalize your depth also, to take it from [zNear, zFar] (the near and far planes of your camera) to [0.0, 1.0]. smoothstep does this nicely. The 1.0 - is to invert the value such that solidsDiff is 1.0 when the difference is the maximum (zFar - zNear) and 0.0 at the minimum (0.0).

Note that I've assumed solidsDepth was already normalized in the depth shader that created the depth map.

You can then modify the alpha channel of your shield depending on the depth difference. Here we start at a minimum alpha of 0.3, then create a nice sharp increase in alpha as we near 0.0 difference.

The - 0.005 offset just adds a white margin to make the "intersection" thicker. Try modifying it!

And finally, apply that alpha to your fragment color.

You could make a curved shield, add plasma for an "energy shield" look (demo) or explore effects with just the intersections showing (demo).

The sky Your graphics card is the limit!

It's just using the depth map. It renders the world then renders the shield and takes a difference between the shield's rendered z value and the depth buffer z value to tint the pixel more white.

Not the answer you're looking for? Browse other questions tagged fragment-shader graphic-effects intersection .

10
How to create a "retro" pixel shader for transformed 2D sprites that maintains pixel fidelity?
2
What is the depth that a pixel shader may output? Is it necessary to write Depth?
4
How to write a custom shader in Unity 3D that lights up a specific pixel or group of pixel?
1
how to make a fast fragment shader that converts intensity to saturation?
4
Algorithm for a rain effect (Shaders)
0
How can I write an additive mesh shader that splits the RGB channels while accounting for depth?