What is the most accurate way to find the correct position to where a moving character should be re-positioned as a collision-resolution, after it has collided with multiple colliders?

The figure below illustrates the situation. The rectangles in black are the walls, the rectangle/circle in blue is the moving character and the arrow in read shows the direction of movement, i.e. in this case from right to left. My set up is in 2D and I am using C# in Unity.

I encountered a similar problem in a game of mine when defining collision physics for grenades my character throws. I found a solution that could fit your needs.

When an object (e.g. a ball) moves along its trajectory, whether or not affected by gravity, it moves from point A to point B every frame (depending on the framerate you wish, you have to deal with delta timing), giving us a hint about its velocity. If no collision occurs when moving from A to B, we just place our ball in its new position, according to kinematics (first case in the image). 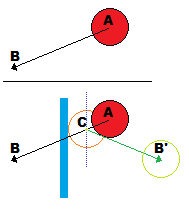 If at least one collision is detected, we find a position C (we don't mind if it's a 2D or 3D model - it works the same) which is the ultimate position along vector AB where our ball doesn't collide with anything else. Though, there's a small distance missing because our ball shall travel AB distance but actually it did AC, that is smaller (second case in the image). Then we calculate two values: the remaining distance (CB = AB - AC, you just apply Phythagoras' theorem when working with x and y values) and the new direction our ball shall move towards.

If motion from A to B is computed by a script (case 1), iterating it first on AC and then on CB (figure 2) will make the ball still travel AB distance, this time according to collision detection. Having more collision points for the same path shouldn't be a big deal, we just iterate our moving script three, four, five times as we need. You can make an iterative or recursive version of this algorithm.

In my personal project, I use an iterative script which does the following operations in order:

EDIT: If your object DOES collide with two distinguished object at the same time, get the new direction angle as vector sum of the two hypotetical angles you would compute.

Not the answer you're looking for? Browse other questions tagged c# collision-detection physics geometry collision-resolution .

2
2D platformer corner collision
5
Collision Detection with SAT: False Collision for Diagonal Movement Towards Vertical Tile-Walls?
2
Circle to Circle collision - bad accuracy
2
How do I resolve a collision of a circle with two rectangle corners?
6
Calculation correct position of object after collision (2d)
3
How to prevent accelerating along wall during 2d sliding collision response
8
3D collision avoidance: finding the updated velocity vector (outside the "collision-velocities" cones)
1
How to move player out of multiple penetrating colliders?