Why not pre-render story parts in a game?

When playing games nowadays there are often story related cut-scenes, during which you cannot interact with the game, you can only listen to it or watch it while it plays.

Why not pre-render a story cut-scene during game development as a video with the highest settings so the user doesn't need to render it on his/her end?

My guess is that game developers don't choose to do this because videos and real-time game rendering need a smooth transition a lot.

I can think of a couple of reasons:

Suggested from the comments:

A lot of game allows characters to change appearance during play. Rendering cut scenes in the engine can reflect these changes. With videos you don't have that flexibility.

Other advantages of rendering cutscenes in-engine include:

In the end it all boils down to the fact that cutscenes rendered in-engine are dynamic, and therefore offer flexibility which a pre-rendered video simply cannot.

Games which got famous for pre-rendered cutscenes looking far better than the actual game are the PlayStation 1 era Final Fantasy games. The protagonist of Final Fantasy VII, for example, looked like this during cutscenes: 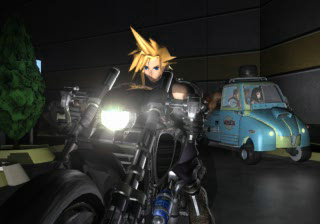 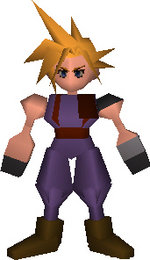 What is the problem with this? The difference between the aesthetics during cutscenes and actual gameplay was so different, that it barely looked like the same game. The break between cutscenes and gameplay was so obvious, it interrupted the immersion and challenged the players suspension of disbelieve.

Nowadays games avoid this by rendering narrative cutscenes with the game engine. That way the cut between interactive and non-interactive portions of the game is far more seamless.

Although it is something which is not 100% abandoned. The Witcher 3, for example, integrates a few pre-rendered CGI sequences. Famous is the intro cutscene, but there is also some subtle use during some key cutscenes in the actual game which can only be noticed by paying attention to video compression artifacts. The consistency problem due to character customization is solved by doing this mostly during scenes where no main characters are on the screen.

Another issue of pre-rendered cutscenes, is covering possibilities, as in today's games, your actions changes the course of in-game story.

Having the game engine render it in real time, means that you only need to send the relevant parameters containing what actions the gamer took up to that point. The game engine then calculates what the possible outcome is from those parameters.

This way, from only one engine, you can add as many possible outcomes you want.

Not the answer you're looking for? Browse other questions tagged rendering .

4
FrameBuffer Render to texture not working all the way
1
Multiple Render Targets not saving data
10
Why would you want multiple render targets?
4
Why can't I write to my render targets?
61
Why are gaming graphics not as beautiful as animated movies?
5
Painter algorithm vs. 3D rendering with Z-buffer when drawing 2D Sprites
0
Graphic render speed in libgdx using many sprite sheets