How to render multiple displays in Unity

I have a scene (lest assume, large glass table I want to looking through) and I want to render with 4 displays (each 1920x1080). How can I set up camera for this, I want the "glass cube" to fill entire scene (all four displays).

If I use single perspective camera and I want to see entire scene, I got stretched image near sides - in other words only middle is correct and sides are stretch. If I correct this, than my scene is not filling entire window and is small.

I have tried to create single camera for each "display", but this will cause frustums overlapping and I have part of the image rendered twice (logically). I can use orthographic-camera, there is no overlap, but I have no perspective.

How to solve this problem?

Edit: I am using Unity 5

Maybe a work around I could suggest:

Have all your cameras positioned at the same location, but shooting each a FOV of 45°, and each rotated of 45° from the previous one. You'll cover a wide angle of 180°. This way, you won't be shooting twice the same thing. Now the tricky part is to have your scene "wraped" around your cameras: you'll need a table that does a half circle, and if you move objects width-wise in the scene, you'll have to move them radially instead.

In the image, we see a top view of what I suggest; the black lines are the four fields of view, and the red shows the bent (in a half circle) rectangle long table. 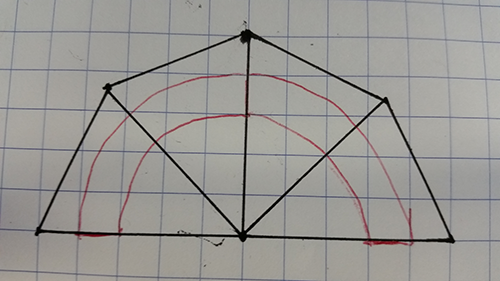 This would be the best if you could project onto a curved surface, and better if your could set up your four displays in a 180° fashion.

This, of course, will not solve your issue, it could only alleviate it.

Not the answer you're looking for? Browse other questions tagged rendering camera unity or ask your own question.