I have recently been toying with the idea of creating a 3D-renderer from scratch and, after looking into it, doesn't seem like such a behemoth of a task as it sounds. Last night, I was tossing and turning in bed because I had tons of ideas and was originally going to base the whole entire renderer off of an index system using vector-lists it occlude points that I don't need, but tossed that out of the window as I realised I needed to prioritise on the main rendering. As most 3D-based developers will know, all of the vertices move around the viewport. This is a nightmare for people who want to make 3rd/1st person games because, if you don't know semi-advanced geometry then you're practically screwed. I realise that people will have to know about their soh's and their toa's eventually but I wanted to release the burden of that by having the viewport (matrix) move around the "world". This is surely better for performance as well, as moving a matrix around must be easier for a gpu/cpu to calculate. I could be totally wrong, but I wanted to give this a go.

In my head, everything sort of works and would produce a "3D" world. The only thing stopping me jumping into C++ and SFML/SDL at this point is a bug (or technically "unimplemented feature") of my program. The way I was going to have my renderer work is like so:

This should work, I think. But there is one issue and that issue is the reason I'm posting all of this.

Let's say that we have something that is bigger/not completely in a view frustum bounds and the camera is not looking at a vertex, how would we figure out that there is a "shape" there. I'm going to draw a crappy example in MS Paint to explain. (Ain't nobody got time for Photoshop..)

Any help is appreciated and a fully understand if what I wrote doesn't 'click'. Thanks! 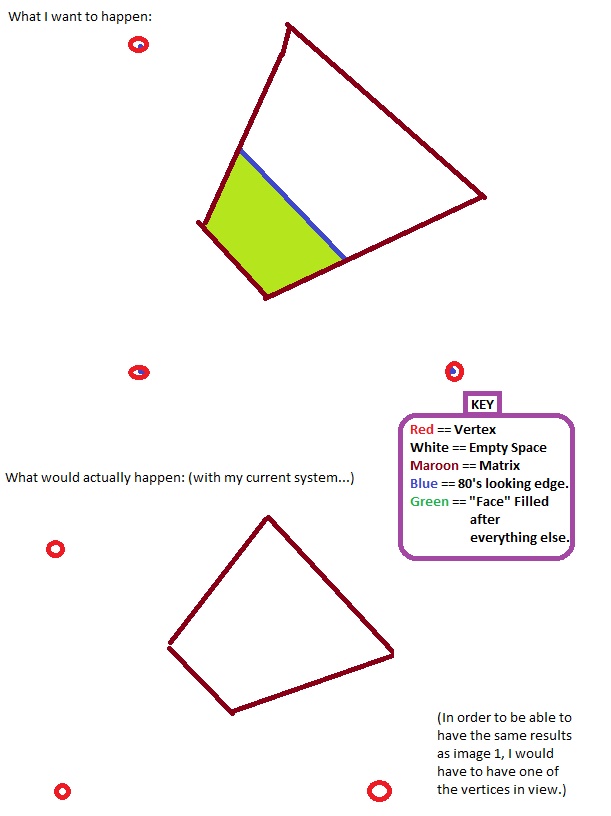 Browse other questions tagged 3d rendering frustum clipping or ask your own question.

3
Calculating camera frustum planes using existing matrix
3
WebGL rendering performance and frustum culling
2
View Frustum Alternative
1
Transform coordinates from 3d to 2d without matrix or built in methods
0
Yet another frustum culling question
0
Frustum culling only working at certain angles
0
What is the relationship between clipping and the fog of war concept?