My player sprite get stuck to walls while moving along 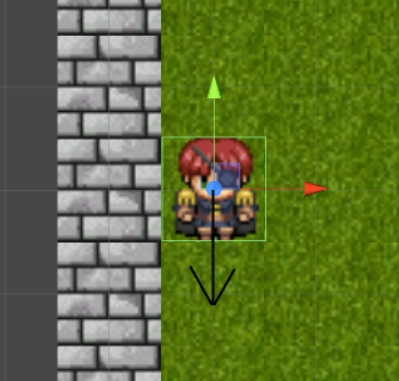 My player sprite is moving along the wall (not even diagonal, just straight down) and get randomly blocked in the corner of some walls. By blocked, I mean that the Y movement is stopped. If I move him away from the wall, he might not be blocked again by the same wall and get blocked at some other walls, always at a corner.

The walls are all the same sprite and are of the same size.

I use 2D Box Colliders for the walls. The player sprite has a Box Collider 2D and a RigidBody 2D. I am not using any physics codes, I would just like to make it work with the built-in Unity physics.

I move the player by adjusting the velocity of the rigidbody according to Input: 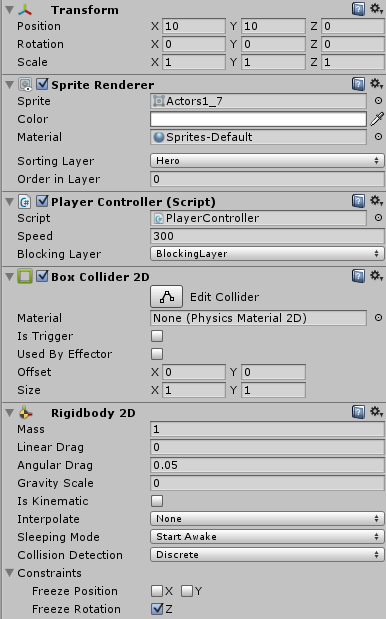 Do you have any idea why it behaves like this and how I could fix it?

This is a common issue when dealing with tiled ground/walls/terrain and BoxCollider2D. Often player collider's corner get stuck with wall's corner even if everything is perfectly lined up. I may suppose that the reason of it - floating point precision problem.

To solve this, you can try a different ways:

Also you may read this two articles: this and this.

Not the answer you're looking for? Browse other questions tagged unity 2d collision-detection or ask your own question.

5
Collision Detection with SAT: False Collision for Diagonal Movement Towards Vertical Tile-Walls?
2
How to implement pathfinding in this situation
8
Ball vs 45-degree slope collision detection
1
2D Box Collision Trouble
0
Bullet: No Bouncing off the walls
2
Stuck on walls or sliding on top dilemma
0
How to implement wall-following behavior?
0
How to construct this collision vector?
1
Unity 2019.3 - Player getting stuck on wall