How to animate a character with props in Blender and then have these props modifiable in Unity3D?

I have created a fully rigged and fully animated humanoid model in Blender with rigging based on Unity's Mecanim standards for humanoid models.

Also, once the model is imported into Unity, I want to be able to replace the sword and the sheathe props with another model, but still be able to retain the animation.

What's the best way of doing this? 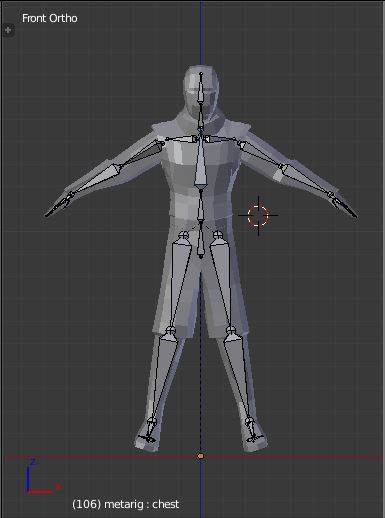 Fig. 1. The model and its armature.

Parent an empty object to the hand bone and use it for swapping and holding props. Whenever you pick up another object, create it at the empty object's position and parent it to it.

This way you can keep your animations you did with Blender and just replace the props in Unity.

That way they could follow the motions and could still be swappable. If you wanted a custom animation for sheathing or something you could have an animation play on the sheath when or something like that.

Not the answer you're looking for? Browse other questions tagged unity 3d animation blender rigging .

14
How do you add equipment to a 3D character model using XNA/Blender?
2
How to port animation from one skeleton to another?
4
How to import character from Blender to Unity?
1
Blender FBX exports to Unity3D have incomplete animation sequences
2
How can I make Maya or Blender model work with mecanim?
7
How to prepare a rigged character model to be imported as a humanoid in unity?
1
Rigged blender model is deformed when imported into Unity