I have an initialized renderer in SDL2 that works fine. I create some textures from images using SDL_CreateTextureFromSurface and store them in a vector.

Afterwards, I create an empty texture so as to render to it a background texture and some text: SDL_Texture * container = SDL_CreateTexture(Renderer,SDL_PIXELFORMAT_RGBA8888,SDL_TEXTUREACCESS_TARGET,size.first,size.second); The problem is that the returned memory address in container is the address of the first texture that was created with renderer as shown in the image below. Textures is a vector< SDL_Texture * > , container is the pointer above. 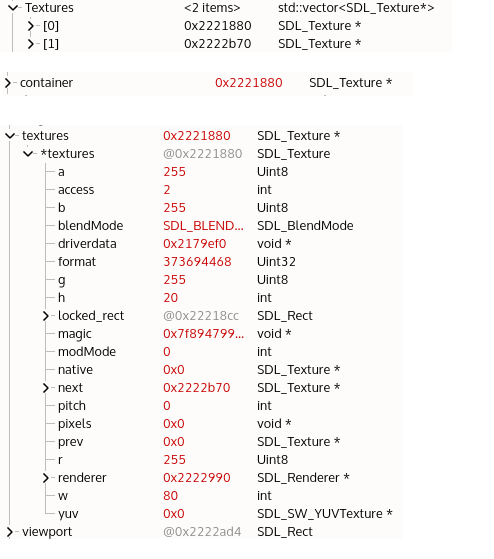 After the call, the texture in the vector is of course overwritten, which is a problem. There are no errors from SDL_GetError().

1
HLSL Textured Light: outputs only a specific part of the texture (new problem)
1
How can I get a pointer to a resource via a base type handle without dynamic_cast?
7
Terrain & Multi-Texturing
0
2D Rendering in DX11. Texture Storage and Reference
4
SDL2 not rendering larger texture to smaller texture
1
C++ OpenGL More textured objects equals less FPS
6
Is this a good way of separating graphics from game logic?
4
How can I render images to multiple windows without creating double textures in SDL2?
1
How can I avoid jittery motion in SDL2?
0
How to make a texture appear the same way in a cube?