Unity's Quaternion.Lerp slows down when target is directly behind turret

I am trying to achieve the effect of a turret in Unity. For this I have a turret consisting of 3 parts as well as a target. The problem is that whenever the target my turret is targeting has a z of < 0, the lerp speed is extremely slow. However, the further away the target is from x=0 (both positive and negative), the faster it will move. This effect only occurs when my target has a transform.position.z of < 0. When z > 0 the transform.position.x has no effect on the lerp speed. My setup is as follows:

The 3 turret parts are the base, turret and barrel. 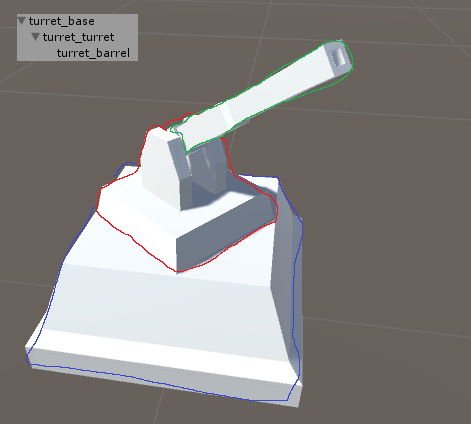 The turret has the following code:

The barrel has the following code:

In this picture the Lerp is working as intended; Note target.transform.z > 0

In this picture the target has a z = -5 and x = 0; pay particular attention to the Lerp speed

It eventually gets there, but it takes a very long time. For some reason, the further away the target is from x=0, the faster the Lerp speed. Note: Still slower than intended

I've done a fair bit of searching and came across a post on answers.unity.com describing a similair problem; Unfortunately, no reply. http://answers.unity3d.com/questions/1084067/lerp-problem-when-target-is-behind.html

So my question is: "Why is this happening and more importantly, how can I fix this?"

Any help would be much appreciated!

Taking a look at your barrel rotation function...

relPos is in world space, so rot is an absolute rotation (ie. relative to the world coordinate frame)

transform.localRotation is relative to the parent's coordinate space.

So this Lerp is blending between a relative orientation and an absolute one.

When you use Lerp this way, the speed or increment each frame is proportional to the difference between the start & end values. (This adds a nice bit of slowing as the rotation approaches the target compared to Quaternion.RotateTowards() which enforces a particular speed)

Assuming your barrel is already pointing somewhat near your target...

So you'll want to make sure you're using apples-to-apples comparisons when Lerping - either work entirely in local space (eg. with transform.parent.InverseTransformDirection(relPos) or Quaternion.Inverse(transform.parent.rotation) ) or entirely in world space.

Not the answer you're looking for? Browse other questions tagged unity quaternion lerp or ask your own question.

0
Calculate vector3 global point projecting it in local space using Unity and C#?
0
Quaternion.Lerp does not actually rotate object when called inside an “if” clause
1
How to completely stop the camera from clipping into the ground
1
Rigidbody slows down when its going up a slope. What can I do?
1
Component Based Spells/Abilities