I am making a "Don't touch the spikes" remake in unity C#. I want to make the effect of the dots behind the bird like in the image below. How can I do this? 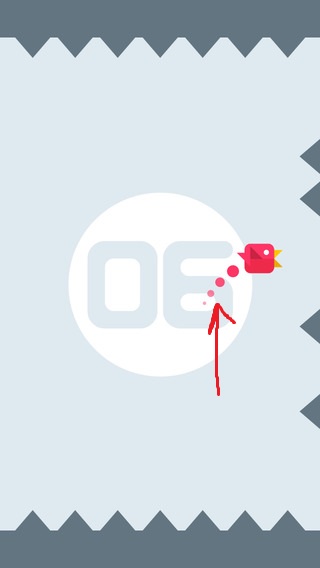 Unity has a readily available Trail Renderer. That's all you need. The Trail Renderer is used to make trails behind objects in the scene as they move about. From the source:

The Trail Renderer is great for a trail behind a projectile, or contrails from the tip of a plane’s wings. It is good when trying to add a general feeling of speed.

In other words, it is best to create a child object and add TrailRenderer component to it instead of adding directly to the main game object.

You will need to create a particle prefab with the small circles as the image that get more transparent and smaller as they travel away. There's quite a lot more to it than that but to go into I feel would take an extremely long answer. Maybe when I get home and can take screenshots but there are a lot of tutorials on the particle system that would probably do a better job than me

15
Create a trailing, ghosting effect of a sprite
1
Effect culling on uneven terrain
3
How do I mask graphics in Unity to create a searchlight effect?
2
How does Unity input work with touchscreens
1
Unity2D: Frost Effect Animation
2
How can I create the water-like blur effect in Chameleon Run using SpriteKit and Unity?
4
How can I make trailing ghost effect (3d game)?
0
How to achieve dotted trail behind moving object with use of Trail Renderer?
0
How can I write a dots effect shader when the character is behind an object?