Player obtains 5 points per level up to level 80 with a maximum of 400. There are 5 stats to be distributed to and no maximum limit to how much you can add to a stat.

I would like to implement a diminishing return equation on let's say Luck. For critical chance, I do not wish for the player to be able to hit 100% critical chance.

There will be a ceiling to which it will reach as the increasingly decreasing growth reaches towards 0 per point added.

Any solutions? Thank you and your help is greatly appreciated!

You want to start with an asymptotic function. That is, one that starts at a number a and approaches another number b, but never actually reaches it. It's probably going to be easiest if a = 0 and b = 1. You'll take this equation, input the number of stat points (Luck points) the character has, and get the actual stat value (Crit Chance) as the output.

A very simple example is y = x / (x + n) where n is some positive constant. Here x is your input, where you feed in the number of stat points, and y is your output, where you get the final stat value. 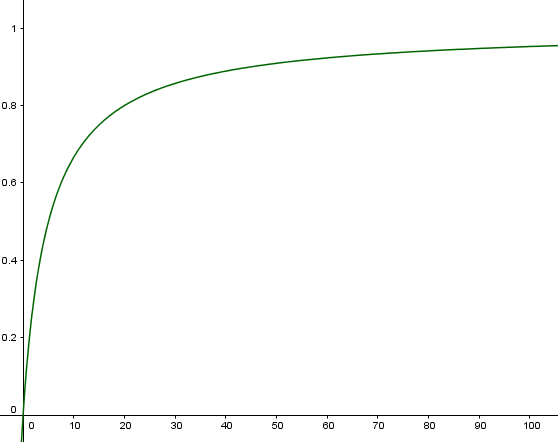 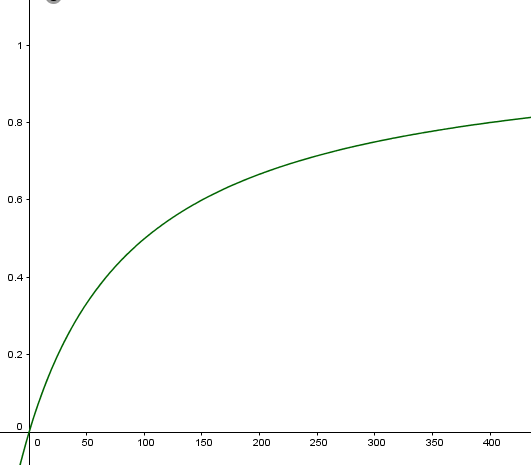 These numbers don't have to be raw constants either. Maybe other stats go into calculating the values of n. Maybe some characters have different n's so they scale better in their 'preferred' stat.

If you want a curve that's shaped differently or is more complex, there are many other examples of asymptotic functions you could use as well. I'll leave you to explore that as you wish.

A good base would be a function like arctan, since it passes through the origin and exhibits a horizontal asymptote.

Scale it by 40 / (pi/2), or 80/pi for your desired limit. Then transform luck to get the curve steepness that you want.

I really like the way that the Souls games tackle this problem. Rather than making each stat give bonuses based on a continuous function as has been suggested, it gives bonuses in a piecewise linear function.

I can't remember the exact numbers off the top of my head, but the functions are along the lines of the following (each stat has its own constants) 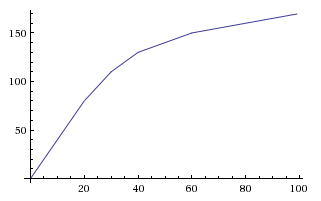 In the case of a continuous function, some levels might give a benefit that doesn't get reflected in the numbers due to measurement aliasing. Sure that last level gave you a 0.9 increase in bonus XYZ, but since the actual value went from 23.52 to 24.42, and you round the number prior to displaying it, the player doesn't realize something has changed.

From a UX perspective, I would definitely suggest going with a piecewise linear function. However, using a continuous function can be easier to tune later down the line, as players won't be as attached to round constants.

Jan Dvorak points out the exponential function in a comment. I'll explain it here.

Note that exponential (and trig) operations are considerably more computationally expensive than even square root operations, which are themselves far worse than basic math, so you're probably better off with Adam's approach if you'll be doing these calculations many times per second. If you just calculate the values when the player levels, changes equipment, etc., speed isn't important, so use whatever gives you the best curve. 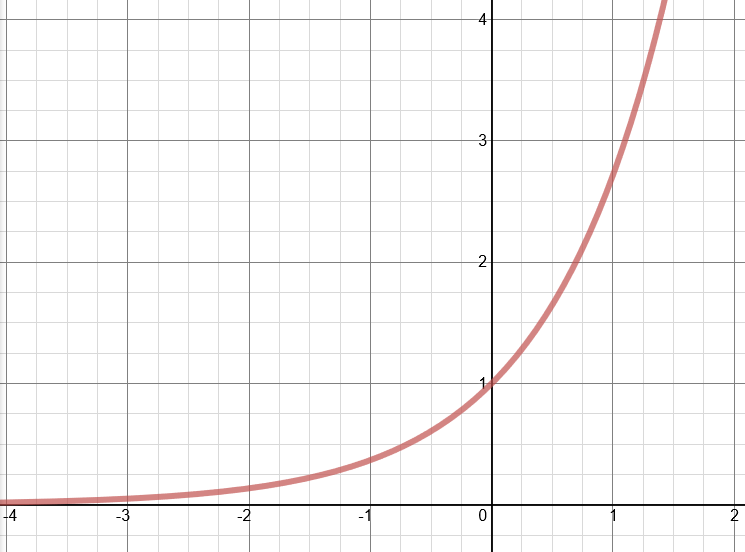 From here, it's just a matter of scaling it vertically and horizontally. We can multiply the entire thing by some value, let's call it A, that sets the asymptotic limit. Then we can multiply x by a rate-of-change value, k, to adjust how quickly it closes in on the limit.

If you wanted, you could adjust both A and k so it's diminishing to a somewhat higher limit at a slower rate, to give something between linear and exponential decay. Doing y=0.6*(1-e^(-0.00447*x)), you end up with this:

With these last several equations, I just plugged the equations into a spreadsheet and manually tweaked values until they looked good. You'd have to do something similar if you wanted a different cap.

For a very simple solution, how about square root x 2

Not the answer you're looking for? Browse other questions tagged rpg .

0
creating levelup stats based on curves
126
How to develop RPG Damage Formulas?
1
How do I calculate/weight a diminishing damage formula based on N targets?
1
common math algorithms that aren't physics/object based

12
Practical balance of "chance" video game mechanics
5
How can I scale player/enemy stats to balance the difficulty just right?
6
What underlying character stats would you put into your "character" object in an RPG engine
0
Simple determining starting experience and to next lvl experience for RPG
1
How to calculate suitable attack speed