EDIT: Just an update, did change from sprite/diffuse to Diffuse and zordering of my level using t2dtk map stuff was backwards. Like the camera flipped around so i had to shuffle things around on the Z axis. Also things that were rendering in 2d with their y rotated 180 degrees no longer were so I had to change how the other engine I was using (Corgi engine) was moving projectiles.

This all worked then in the editor. When I pushed to the system, still nothing renders unless the rendering path is legacy vertex lit. And then it will render but dark like my directional light and point lights are meaningless. Apparently I am not cool enough to mess with Shaders/Unity 5 and mobile.

It seems like Mobile is having an issue rendering my diffuse sprites. I just made some of the sprites in my game diffuse so point lights would give them a nice lit up effect. This works great on PC but when I push the game to my mobile phone (a Galaxy Note 3) nothing that has that diffuse material renders at all. I am assuming it is just setting but I cannot figure out for the life me how to get this to work. I tried to muck with settings (rendering paths etc) nothing seemed to help. Of note: The stuff renders fine in Unity editor when the mobile target is selected even.

I'd put my money on shader problems here. Typically one "shader" script contains multiple options of CG programs, generally the ones with the higher hardware / software requirements go at the top of the script, and older / slower devices fallback to the best of the lesser shaders they can support. I'd take a peek at the "Diffuse" Shader Script you are using to see what exactly the fallbacks are doing. (In version 5.0 Unity actually classified nearly all of the previous shaders as "Legacy" and reorganized the remaining to better differentiate the new PBR stuff.)

tldr; All of the back story aside...

You should be able to find less resource intensive shaders specifically designed for mobile under the Material : Shader > Mobile > Diffuse, from the drop down. Try this one: 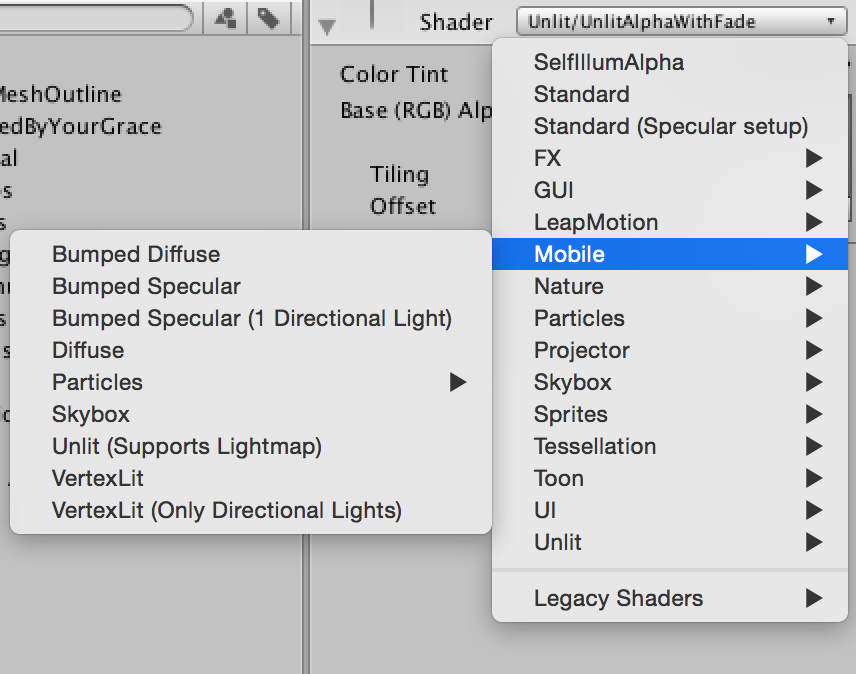 8
Is Java AWT suitable for 2d game rendering?
0
Discarding triangles in Unity
2
Unity 2D: Sprites/Diffuse is making my character weird, like an antialias
1
Unity sprites rendering problems on Android
3
How do I get a Light's Range value in Shader?
0
Dynamically setting parent causing strange object scaling
2
Unity – How to keep sprites sharp and crisp, even while rotating
1
How to re-render the scene only when something changes in Unity?