By this definition, we can make a map like this: 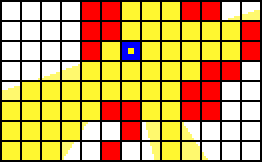 I'm not interested in partially visible pixels, but I need to find out which pixels are visible. I don't know where to start. My only idea was to loop angles, but that doesn't work on larger map, where one iteration skips many actual pixels. 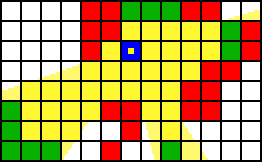 And looping through all pixels must be probably avoided, that would eat up too much performance.

The trick is to cast rays from the source point to the edges of occupied squares.

See also my answer on a similar question: 2D - Smooth lighting with shadows for a tile-based game

And an example of the algorithm in a polygon environment: http://ncase.me/sight-and-light/ The theory is also easily applied to a grid, since that could be represented by bunch of square polygons.

Not the answer you're looking for? Browse other questions tagged mathematics algorithm line-of-sight or ask your own question.

5
2D - Smooth lighting with shadows for a tile-based game

19
Calculate random points (pixel) within a circle (image)
4
Create shape from points / lines in editor and mathematically calculate nearest points within shape
5
Line draw on “even-q” vertical flat topped hex grid
2
Calculation: Is a sphere/square/plane visible from a certain point?
1
Calculate the extreme points of a quadrilateral
2
How to find grid cells not seen by an object
0
Calculate line intersecting most points, based on random points in a grid
1
Calculate position on Isometric grid
2
How to calculate all points in a 2D grid defined by an arc, given a starting point and range
1
Simple stupid funnel algorithm without visible points