Changing the duration of motion state transitions in Animator Controller

Anyone around who is experienced with Unity animation states and the Animation Controller? I wonder is it possible in Unity to change the duration of time it takes between motion transitions in the Animator Controller?

To give an example let's say I have a human character that has an initial state of Grounded and in this state I have several motions like idle, running forward/backward and strafe left/right. When I now have the character in idle and I move left/right to go into strafe motion, the duration of the transition from idle to strafe left/right takes too long and I want it to be faster. I only want that transition between the motion states to be faster but not the actual animation itself. I think there should be a way to do this but I can't find any options for changing the duration between motions.

You can make use of threshold to achieve this. If you place the threshold of two events close to each other then the transition will happen very quickly. But this gives rise to a new problem, i.e. the animation state in the center does not stay active for a longer time. For that we add the same animation twice and put its threshold to the desired max range

Refer to the following image 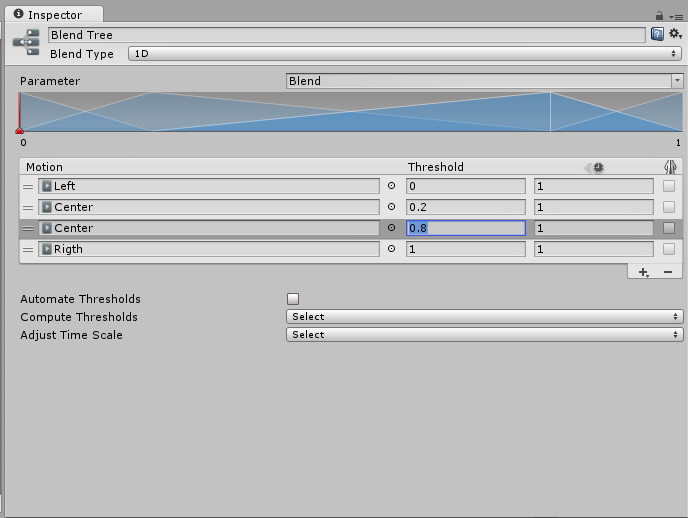 So in this way the transition is restricted to a range of 0.2 rather than 0.5 (which is typically seen in the normal setup i.e. 0 to 0.5 to 1) . Refer to the following image. 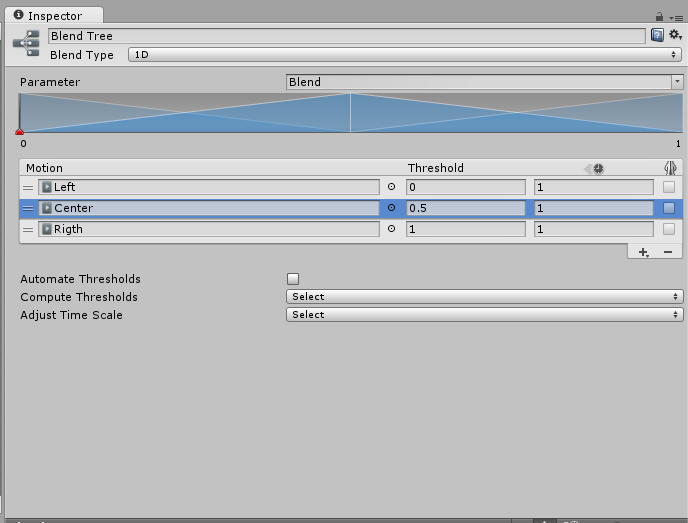 Not the answer you're looking for? Browse other questions tagged unity animation state mecanim motion .

2
Unity animator controller animations don't work
1
Changing motion clips via script in Unity
9
How to avoid spaghetti in the animator?
0
Why is the character not walking right when creating new animator controller for the character?
0
Animator State does not switch immediately through code, even tho all transitions have "Has Exit Time" checked off
1
Animator stuck in previous state and not transitioning, even if transition condition is true