How do I create a rocket projectile that is “dropped”, then accelerates toward the enemy?

Now I want to add some rocket-styled bullets, with a certain flight path: The rockets should be "dropped" back first, then accelerate towards the enemy.

I'm having difficulty making this work when the shooter is rotated. To visualize what I mean: 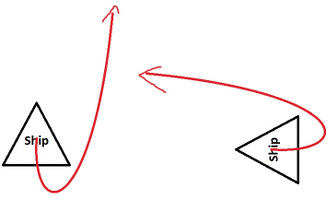 Bullets have a lifeTime which increases every frame.

A simple way to achieve this effect would be to launch the missile with an initial velocity of (ship's backwards vector + ship's rightwards vector), then apply a constant acceleration of (ship's forward vector) each frame, until it reaches some maximum forward velocity.

Of course, that describes a "dumb" rocket that always follows that (rightward) trajectory. If you're looking for a "homing" rocket, you can achieve that by launching with only (ship's backward vector) as the initial velocity, and applying the acceleration in the direction of the target (instead of just forwards) every frame instead.

If the engine you're using doesn't give you your ship object's directional vectors for free (Unity's transform.forward is a godsend for this sort of task), then you'll have to calculate them yourself. Given the ship's rotation as a number of degrees from some starting angle, and the ship's forward and rightward vectors when at the starting angle, you can calculate the ship's forward and rightward vectors at the specified rotation like this:

For further reading, I highly recommend the Wolfire Games blog posts on "Linear algebra for game developers", which begin here. Part 3 contains a description of calculating and applying basis vectors, which is pretty much exactly the problem you're trying to solve here.

Not the answer you're looking for? Browse other questions tagged rotation vector projectile-physics or ask your own question.

1
Rotate triangle so that its tip points in the direction of the point on the screen that we last touched
7
Path following with Asteroids-like movement. Time to complete path
1
How to make an enemy projectile head to the player's position with constant speed
3
How to create a projectile motion of a cannonball in top down view?
1
Computing how fast a vector should go toward certain direction
0
Moving an Enemy Toward the Player but only in cardinal+diagonal directions
0
How to create a projectile path in unity using physics