masking with 3d object in unity

I have a 3d plane in my scene and some 3d objects behind that plane. So, i want to render only the part behind the 3d plane. 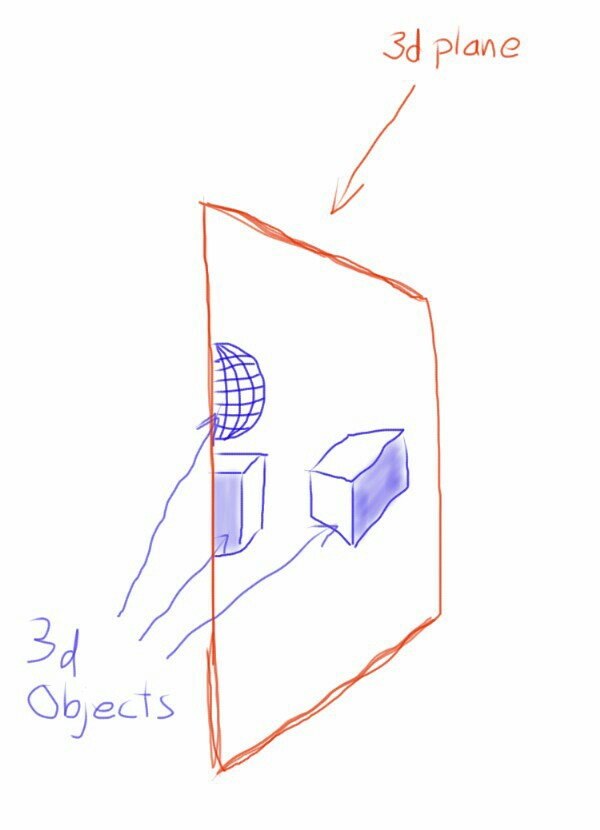 So how should I do this, should I have to use custom shaders, plz help.

This type of thing is typically done with the stencil buffer. This has a couple of downsides for your use case in Unity though:

So, I'd lean toward doing it in a slightly less elegant way with multiple cameras and a rendertarget, because it will be quicker to get up & running and flexible as you add new objects & materials to your scene. It also makes it straightforward to apply image effects selectively to the objects on the other side.

(The fog stuff is part of Unity's default unlit shader, but you can delete it if you don't need to use fog in your scene)

If you need to alpha-test or blend this content with stuff behind the plane in the second camera's view, that will require some modifications.

Note that this method looks correct from the perspective of the in-game cameras, but won't look correct in general in the Scene view, since it doesn't have a duplicate camera of its own. There are ways to fix this if you need, but they get a bit more complex.

share|improve this answer
edited Jan 26 at 4:44

Not the answer you're looking for? Browse other questions tagged unity 3d shaders or ask your own question.

2
Dr.Strange's door in Unity3D, how to put a projected void on a plane?

0
Calculating distance from viewer to object in a shader
0
Creating a fragment shader to darken a white texture over time - OpenGL GLSL
4
2d metaballs with shader to give blobs of water effect?
20
How many active shaders at one frame in the game should I typically use? 5 or more like 100?
0
Unity 5 - Texture/Material rendering issue
5
Render Occluded pixels to gray color
0
XNA 2 3D Objects Depth Convergence Error
0
Shader change alpha depending on light
4
Matte reflection effect in Unity?