A few weeks back I posted a question about keeping an object on the screen. What I would like to do now is clamping an object around a 2d radius based on the camera.

I'm need this for a reticule for this on rail shooter I've been making. (like that of starfox) 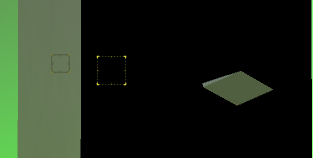 Here is the current code I am using :

The problem with this set up is that I'm restricting it around 3-dimensional objects base off their locations in the world. (this is restricting the players movement towards the edges not letting the player to move the reticule to the side)

So this is what I've tried:

This just seems to send the empty (which the ship is pointing at) off some where else in the world I cant even tell if I'm moving it or if its just moving with the parent object. (I've tried different variations with this moving the screenPosition swapping it with the transforms position in world space to no avail)

My guess is that its not converting 2d space to 3d space when I try to clamp a 3d object within that radius.

I would like to keep my reticule at an empty point on the screen and not replace it with the cursor.

Okay i have now thought up a new system that still needs some work. Having an empty object next to the reticule. With this I cut out the need for a 2d radius but I need this object object follow the ship on on the screen with taking in account the perception of the camera.

I have taken a measure of the height and width of the camera. Its not too exact but it should do.

So i guess I would like to know how the coordinate system on the camera is set up. like where is (0, 0)

Okay I've found a way to do this but it took a quite a bit of math on my part and a bit of estimation on my behalf.

The way I've set it up is that I moving the pivot the same way I'm moving the ship only I'm multiplying it times the proportion of distance the ship can move side to side vs the distance the pivot can move side to side. I still have not built in an equation that will allow me to move the point farther back with more accuracy but this is a good temporary fix and if i really have to move it I'll i do the math again. but I would still like to have the equation of the rate of change. I'm not that brilliant at related rates. If you want to see my math I noted it down.

so the multiplier at 100

so the multiplier at 100

Oh in case your wondering how i got my measurements I measured the distance manually with points.

It sounds like you've done a lot of math in 3D space to try and support this feature, taking into account the position of the ship and the camera, etc. But unless I'm missing something, I think there's an easier way.

This should work whether you want the game to be in first-person or third-person view. 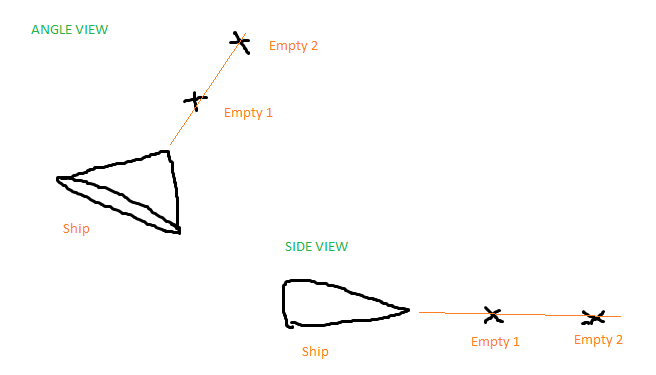 In short, what you're doing is moving around some reticles right in front of your camera to overlap invisible objects you put in the player's line of fire.

If you don't want to have the reticles sitting in front of your main camera at the near clipping plane, which is usually pretty close, you can consider these options:

Not the answer you're looking for? Browse other questions tagged unity c# camera control or ask your own question.

0
Unity3D 3.5 pro - Moving the camera vs setting draw distance
5
Panning with the OpenGL Camera / View Matrix
1
Camera movement constrained to pixel boundaries
1
How would I check the range against the entirety of an enemy object, and not just it's transform.position?
2
Constraining camera bounds within bounds based on Unity UI object dimensions
0
Move Camera After Player Moves Certain Distance
0
How can I make object to follow first person character and the camera without making the object child?
1
How to completely stop the camera from clipping into the ground
0
Moving a top-down camera while keeping its height constant
0
How to move a player (with camera) towards a target object until camera fill target object?