I don't find what I'm missing. Why is not that ImageTargetStones GameObject in the AR scene?

I think I want to use Vuforia for an uncommon use. I think that's a reason of a possible misunderstanding.

I don't want to use its image recognition possibilities. I want to switch between AR to VR when glazing to a button.

I have tried to duplicate the VRButton to move it to an independent place of the scene with no parent. I have checked its IsTrigger checkbox. I have added a PointerEnter EventTrigger that set Focused to true. I have added a PhysicsRaycaster to both AR Camera and MainCamera (child of CardboardMain-Head).

Nothing happens when I gaze at the button. I have to compile everytime I want to try it by the way. I did not manage to make it work in the editor.

I haven't been able to do it with vuforia yet. I have done it with WebCamTexture. Specifically, I have used the scripts of this answer: http://answers.unity3d.com/answers/687987/view.html . The result is not nice because the image from camera seems closer than it actually is (with Vuforia, there is not that problem)

The AR Camera of the demo scene provided comes with a GazeRay GameObject. That GazeRay has a GazeRay Script Component. We have to increase the Size of View Triggers. Then we have to add the GameObject we want to trigger.

Notice the GameObject we want to trigger has a ViewTrigger Script Component we better take a look to.

Notice I don't understand why it is not working with the RayCast I mention in the UPDATE 1 of the question. 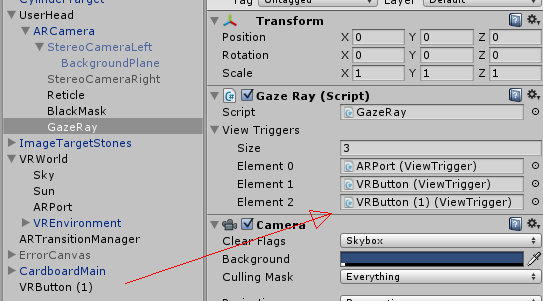 Not the answer you're looking for? Browse other questions tagged unity virtual-reality augmented-reality vuforia .

3
With Cardboard, reorient player to direction of gaze
3
How to make user move in virtual reality with Google Cardboard and Unity?
0
How can I load a scene when starting a new game if the loading scene have a Main Camera?
0
The cube does not rotate with Vuforia virtual button in Unity3d
0
Add Camera Dynamically?