HeightMap from a graph

This is just a toy experiment.

I laid out a graph in 2d space, so that every node has x and y coordinates. I'm considering degree of a node as a height value at position x and y of a height map.

I wonder what's the best strategy to interpolate this sparse heightmap with missing values?

Ideally I'd love to have some sort of gravitational pull towards the bottom in the places where I don't have height values. Think of it like somebody dropped fabric on bunch of spikes...

So, you're looking for a method of two-dimensional interpolation. Unfortunately, this isn't a perfect two-dimensional grid (mathematically, it's not a lattice). We have irregularly-spaced points, and so this makes things slightly less convenient. However, we still have plenty of options:

Here's a visual comparison of these methods: 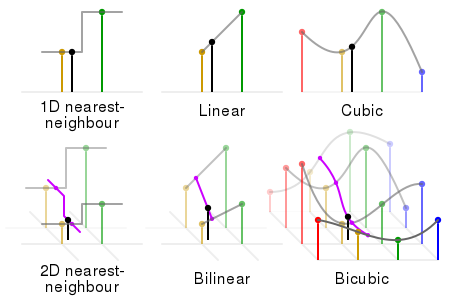 You can implement these by hand, if you so desire. However, many numerics libraries have them built-in. Take Python's SciPy, for instance (I'm using Python as an example because it's what I'm most familiar with). It has several methods of interpolation which can be used without too much trouble (I just came across this Stack Overflow answer by Andras Deak, an awesome comparison of some of them):

Not the answer you're looking for? Browse other questions tagged mathematics interpolation heightmap graph or ask your own question.

0
Heightmap implementation in javascript question, a 2D water heightmap
1
Defining lines from a heightmap
2
Voronoi / Delaunay Graph - Triangle Circumcenter error
7
How to create a map from graph
0
Bake a heightmap from Editor