Getting the tile over wich the mouse cursor is

Im making a tilebased game, I have the rendering, the main engine, everything setup nicely (btw Im using LWJGL and Slick). Now this is more of a math question. How do I get the tile the mouse is on, so that I can draw a rectangle around that tile, so that I can later do stuff with that tile (e.g. if its stone Ill break it if I click...) I draw the map at an offset so the player is always in the middle of the screen, the upper left corner coordinates Ive called xot and yot, the offsets xOff and yOff, and yea. If anyone knows what math I need to use to get the propper tile x and y. 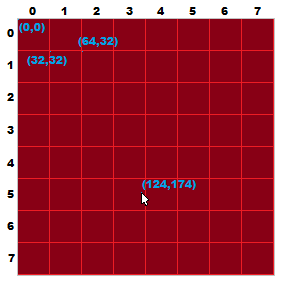 Be careful when dealing with coordinates: the horizontal and vertical lines are still part of a given tile, as follows:

Based on the previous, we want our cursor to map the tile at position [3,5] in our grid. Such an algorithm must convert mouse coordinates on the screen into world coordinates, and we do this by considering the current camera (or view) position in the world, and sum these values to the mouse coordinates (I'm using sort of pseudo-code):

At this point, your mouse_x and mouse_y variables are both holding the absolute coordinates in your world. A graphical explanation of this follows: 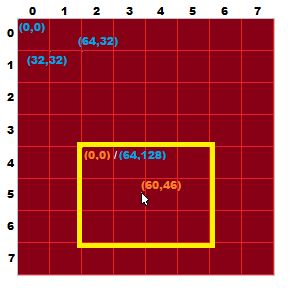 Right as it was in the very first picture.

Now, let's convert mouse coordinates in the world into tiles indexes in our grid. We want our x coordinates to refer to column 0 when x value is between 0 and 31 (included), column 1 when its value is between 32 and 63 (included), and so on. Same story for y coordinates related to the index of rows. Then, we divide the current coordinate with the width of a tile - getting a ratio value - and finally we round it to the lowest integer to get the index for each axis:

How does this work? Our mouse_x and mouse_y variables were holding the mouse position in the world after the first part: (124,174). The math happened here was, for x axis:

Aaand here are the indexes of the tile the mouse is on: 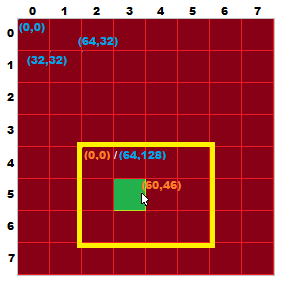 Not the answer you're looking for? Browse other questions tagged java mathematics lwjgl slick .

3
How do I convert the coordinates of a click to a tilemap position?

1
Java: Tile-based Collision Detection with Rectangles
6
Circle-Rectangle collision in a tile map game
0
Match 3 game - Check for matches
1
Java delaying commands in a method with time (Sys.getTime)
1
Java heart based health mechanic
2
How to draw a circle that is around an object and becomes smaller if the player enters it
3
Math behind drawing one game object relative to another?
2
Tile detection on a 2D isometric layered diamond shaped map - What are the math?
0
Collision detection with isometric tiles stored in rectangular files