How do I draw multiple irregular polygons with OpenGL ES?

In this post I was asking how to program a map of a Risk-like game.

Now that the map is pretty coded, both client and server-side, I'd like to finally draw the map.

I'll try to keep least broad as possible in this question, and also avoid XY problem.

So, my X problem is that I need an interactive map, based on (irregular) polygons.

Now, since this question would be really broad (there is a heavy number of possible solutions and libraries for a skilled programmer), this is how I imagined my Y solution:

Since the polygons have to be 10, touch-interactive, filled with plain color, I think that OpenGL ES should go fine for me. I'm also attracted by Path and Point classes, but the problem is that

I don't know if Path and Point classes would fit for this. My intent is more game-like than generic, so I think I'll stick with OpenGL ES solution.

The problem is that I don't understand

(considering we're talking about 10 polygons, there is a kind of environnment for doing this?)

I followed Android Open GL tutorial, but it only shows simple polygons and alone, I'd need 10 with lot of vertexes and above all that can fit each others.

EDIT: I also tried to follow this tutorial. This is an image taken from that one: 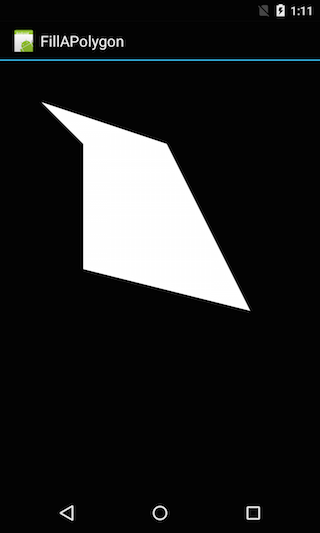 To me instead, it's more little and near top-left corner. This is another trouble I'd like to avoid (as I said in point 1 above): my polygons should always fit the screen (and this is also why I want to use OpenGL ES).

So you want to draw polygons that fit the screen and have touch support? Opengl can be used to draw the polygons, touch support can be realised independent from opengl by a thing that is called ray triangle intersection and requires you to understand a bit of math.

Here's how you maintain the correct size on different screen resolutions: you use what is called projection matrix. In your case an orthographic projection is sufficient. Please read about opengl matrices here: https://learnopengl.com/Getting-started/Coordinate-Systems

How to touch those polygons? First you have to calculate a picking ray by going from screen pixel position aka the screen space to world space. Easiest way to understand the picking ray is to understand the projection matrix. Everything you see on screen starts at the near plane and ends at the far plane. So if you want to test if you are touching an object you have to project your screen position to the nearplane and the far plane, those 2 points form a 3d line which is the ray I'm talking about. Now you go through all your polygons and test each triangle for intersection with the ray. An example can be found on github in sharpdx repository and collision.cs. you can simplify the intersection test because you only need 2d test in which case it's enough to project screen coordinates to ndc space and test all triangles if the ndc touch coordinate is inside the triangle.

Or if you don't want to learn maths you can simply put your polygons as pictures and use them as backgrounds of buttons. Not very precise but maybe enough.

Not the answer you're looking for? Browse other questions tagged java android opengl-es opengl-es2 or ask your own question.

0
How to design programatically a game map like Risk?

1
2D Rendering with OpenGL ES 2.0 on Android (matrices not working)
4
Trying to Draw a 2D Triangle in OpenGL ES 2.0
0
Overlapping buttons with OpenGL and GLKit
1
How to deal with lot of textures in one draw call?
6
Implementing realistic sun reflection on a sea
0
OpenGL ES 2.0 2D-Image displaying
1
Bad performance using VBO with OpenGL ES in Android
1
How to send dynamic data to a vertex shader OpenGL ES 2 Android