How do I check for collision between an ellipse and a rectangle?

I am working on LibGdx framework for developing a 2D isometric tower defense game.All my sprites are drawn in 2D isometric view. 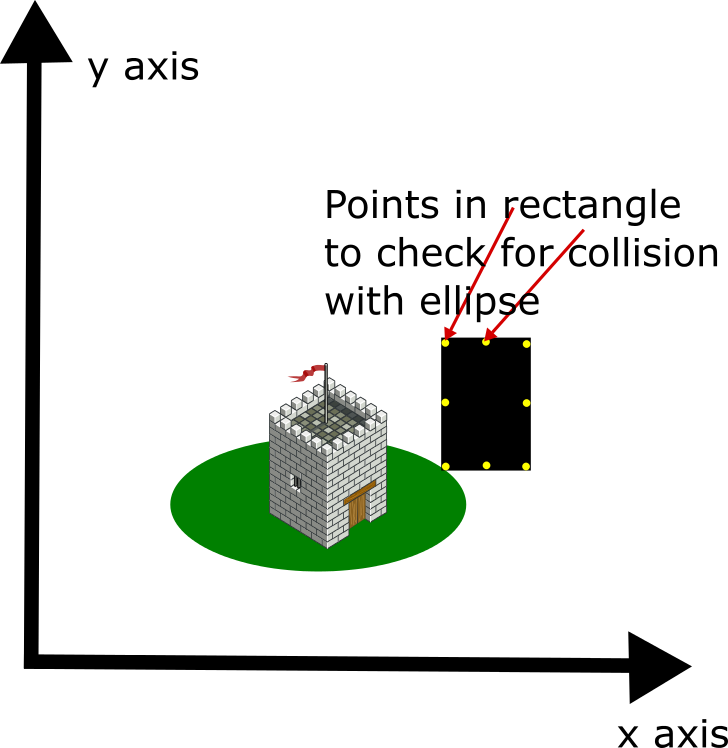 I have used an array list to store 8 points at boundary in the rectangle.LibGdx has an inbuilt function (returns Boolean) ellipse.contains(x,y),by iterating through array list I can check whether any points are inside ellipse But the problem is as shown in below picture,it wont detect the enemies in some particular cases 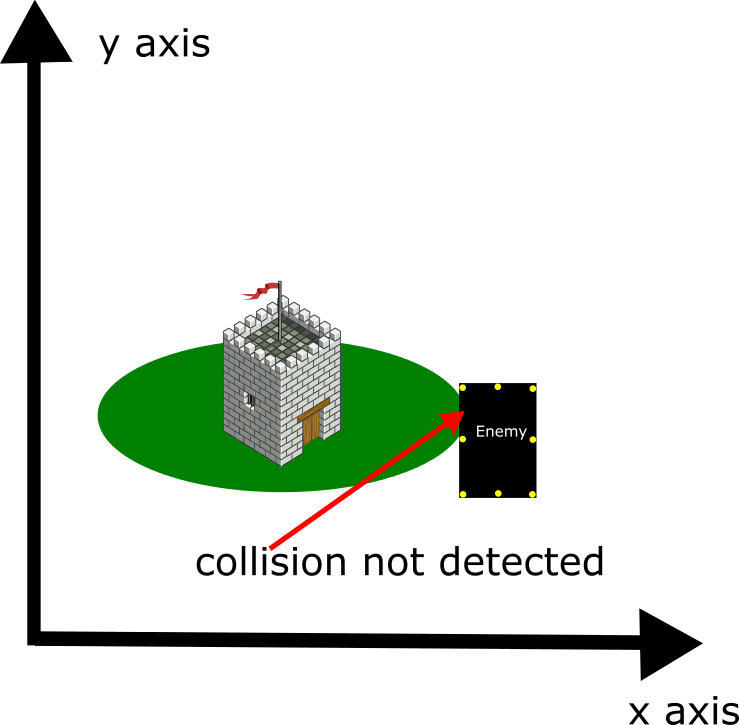 I'm going to tell you how to do it with a computationally cheap way in terms of CPU usage.

First, let's say that the calculation of seking if a point is "inside the ellipse or not" is not computationally cheap, while comparing just rectangles with mere "greater than" or "less than" comparisons are ultra cheap.

Definition 1) Ellipse and its quadrants

If the perspective is isometric I'm going to assume that the axes of the ellipse E are always horizontal and vertical.

The axes define 4 quadrants Q around the center of the ellipse E as seen in the following picture. Let's name them like this: 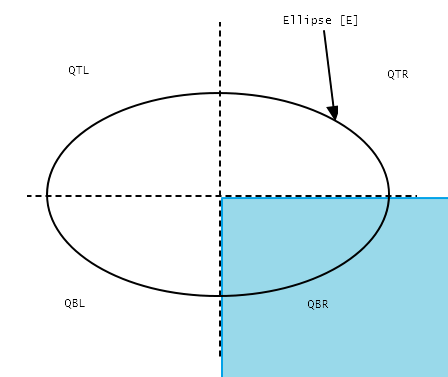 Note that the quadrant is all the area defined by the axes, like for example, the blue area for QBR, which comprises the area inside the ellipse and the area outside it, despite of where the labels are set in the image.

Definition 2) Ellipse and its bounding box

Now let's define a bounding box B around the ellipse E, like in this image: 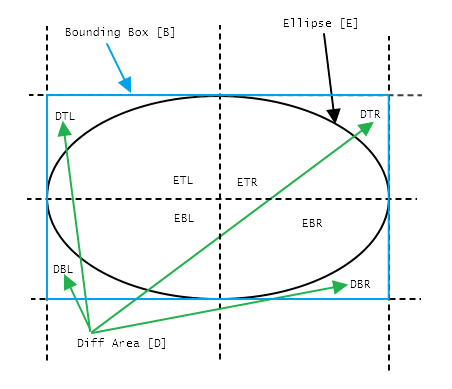 Those are the names for the areas inside the ellipse:

And these for the "diff areas" (the ones inside B but outside E):

Additionally, watching your images, I'm going to imagine that the enemies are always bound with a rectangle R whose sides are exactly horizontal and vertical.

Also, I am going to use only the 4 vertexes V of the rectagle and forget about the intermediate points you used.

Checking this first saves a lot of calculation as you forget expensive calculations to discard a lot of rectangles (and most of the time enemies shall be far).

You can check if R is outside B by checking each 4 sides:

R is outside B if and only if:

If the enemy R is outside the bounding box B set collision to false and end the algorithm here.

Note that checking the bounding box is a cheap operation.

If you are here, it means that your enemy R shares at least one small area with the bounding box B, and we require further analysis to see if the enemy collides or not with the ellipse E.

Look at this image: 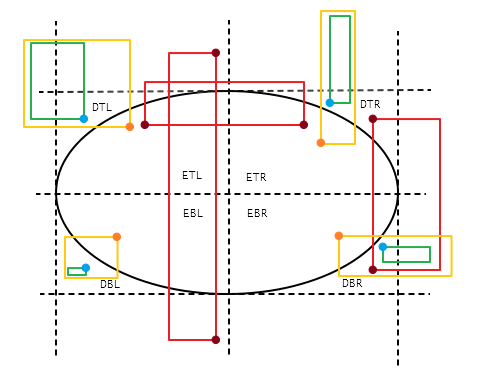 I have painted rectangles of 3 types here. The green and yellow rectangles share a common characteristic: All the 4 vertexes of the rectangle R fall in the very same quadrant. And this does not ensure if the enemy R collides with the ellipse E or not.

Instead, all the red rectangles also share not only one characteristic, but two:

So if one rectangle not catched in step 1, then, in step 2, has vertexes in different quadrants, then necessarily it happens that some points of some axis that are also contained in the ellipse E are shared with the rectangle R. This means that the rectangle R for sure collides with E at least on those axis points and for sure all non-axis points surrounding the points mentioned before, to the extent of the limit of R or E whichever comes first.

So... if a rectangle has vertexes in any different quadrant than the other vertexes of itself, just mark collision = true and exit the algorithm.

Note that checking if all vertexes fall in the same quadrant is merely checking coordinates with "greater than" or "less than" comparisons, so it's a cheap operation.

So, finally, we enter step 3 only with green and yellow rectangles. Ie: it's a pre-requisite we may assume. Enemies R here shall match that:

We can then conclude that:

So we can reformualte the conclussion as:

But it also happens that, by Reductio ad absurdum we can say that:

We don't care if "the other vertexes" are inside or outside the box. And you don't have to do complex maths to select the nearest vertex... just it is straight forward:

Those vertexes are highlighted in the green and yellow rectangles of the picture.

Just then test one single selected vertex with the expensive maths. Test that vertex against the ellipse.

Set the collision flag if the selected vertex is in the ellipse area Exx, otherwise the vertex shall lie in Dxx and leave collision clear.

Computationally the cost of this 3rd step is just one single complex calculation at most. Never more than 1 vertex per rectangle.

End of the algorithm.

I hope I have helped! Cheers.

Not the answer you're looking for? Browse other questions tagged android collision-detection libgdx mathematics .