I would like to know if there's a way to remap a value that goes from 0 to 1 constantly like this. 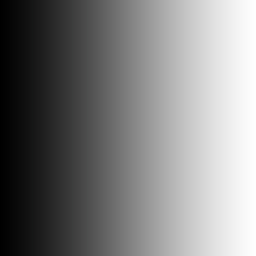 Into those values (those are examples).

This might be some function transformation but I can't find the way to do that. I've tried using a lookup texture but in my opinion this is not the best solution.
Thank you very much.

This gives a nice smooth gradient, Where as if you take an auxiliary function, say a(t)=t^2 you'll notice this also goes between 0 and 1 (as t goes from 0 to 1 but it starts much slower then gets much faster.

You can compose the two, by using f(a(t)) this "alters the speed" that t changes if you will.

If f(t) has gradient 1 (uniformly, as the gradient increases at a constant rate, it must be 1 to go from the far ends of the colour gradient over a time of "1")

Using different a(t) you can get different effects

(someone else was asking about altering rates of change earlier, Can I use sin or cos for the non uniform rotation in unity 5? but for some reason I got a comment-less downvote, this is a similar question right?)

It'll rise really sharply as we go from 0 to 0.1 then increase slowly to 1.

If we differentiate this we get:

Notice the jump, it is NOT continuous, which will be apparent in the result.

Don't fret though, there are plenty of "smooth" functions to choose from!

As @dari said, the smoothstep function is the best solution to achieve what I need.

Not the answer you're looking for? Browse other questions tagged opengl shaders directx glsl hlsl .

0
Can I use sin or cos for the non uniform rotation in unity 5?