How do I ensure consistent behaviour when using Unity's Collider2Ds for triggers and collisions?

A projectile is organized into a container Projectile GO and two children GO: a PhysicsColliders GO and a HitBoxColliders GO.

The PhysicsCollidersGO job is to hold the colliders that define the solid regions of the projectile using Collider2D components. It's GO is on a Projectile layer which is set to collide with other solid layers such as the ones my walls are on. Walls are static colliders.

The HitBoxCollidersGO job is to define the a HitBox area. It's GO is on a HitBox layer and also uses Collider2D components that are set to be triggers. A HitScript on the GO listens for OnEnterTrigger.

Projectiles are set in motion by setting the velocity of the RigidBody once upon firing.

Here is a visual of the structure:

Here are descriptions of the GameObjects and their components:

Problem 2. Projectiles will sometimes not trigger a hit.

What could be causing these inconsistencies? How can ensure that collisions and triggers will consistently behave correctly?

I'd like to start with making the assumption that these objects are traveling relatively quickly, I have seen similar behavior and was able to get more reliable physics interactions doing a combination of the following three solutions.

First off - since physics interactions are calculated at fixed intervals, reducing the speed of fast moving objects (not always possible) can greatly reduce these issues.

If thats not an option, (or in conjunction with reducing the speed) you should look to changing the Collision Detection Mode on the Rigidbody/2d Component 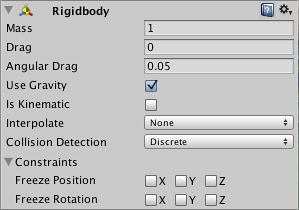 If for some reason continuous is not enough you can opt in to a more performance requiring option by scaling down the Unity "Fixed Time Step" for your project... ultimately asking Unity to do more physics computations per second.

4
2D Tile-based Collision Detection
2
Smoothing Pathfinding on Tile-Based Terrain but Free-Roaming Player
0
Dynamically setting parent causing strange object scaling
0
Unity: How to apply bloom to only some objects in the scene?
1
Character keeps falling through the terrain and jittering
0
AddForce results in stuttering movement
2
Unity RigidBody not rebounding as expected on low-impact collisions
0
Unity: How to fix collision detection with fast moving objects in 2D?