I'm currently learning about how to do this, but it's best to post the problem beforehand. (posting on Physics and GameDev, as you guys know your math)

It's quite difficult to explain. This specific problem revolves around a problem of creating a guidance system for rocket powered craft.
Think: 'I want the ship from game "Asteroids" to follow a specific path and compute, how much time will the whole trip take beforehand"

A craft has it's own properties like mass, linear and angular acceleration. It is only able to accelerate in its forwards direction. Also, quite a pain in the... it's maximum traverse velocity is limited.

Hopefully the picture clears some things out: 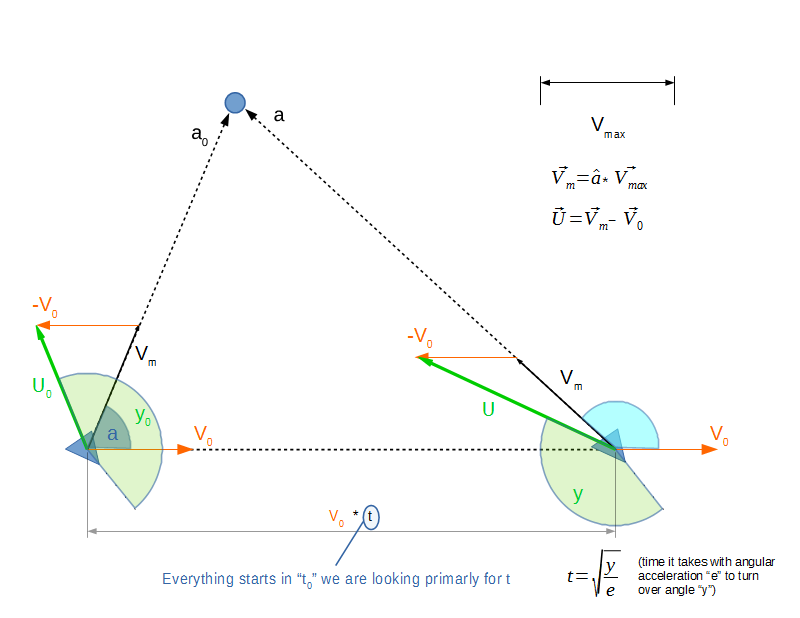 The problem lays in the very first step. The program is initiated while the craft is already moving with random velocity and faces random direction. In order to move fully toward the target point, first the craft has to turn to face "U" vector. But while doing so, it still moves, so the vector "U" will change. From the picture you can see that the direction of turn can change, don't worry, it's not a problem.

So, the problem. I tried using only vector math, but with no success as the variable I'm trying to compute relies on equations involving this variable. I'm too dumb to get only the variable I'm interested in on one side of equation. I think the solution would involve a function of distance from craft to object over time.

For your interest. Here is the part where I get stuck. 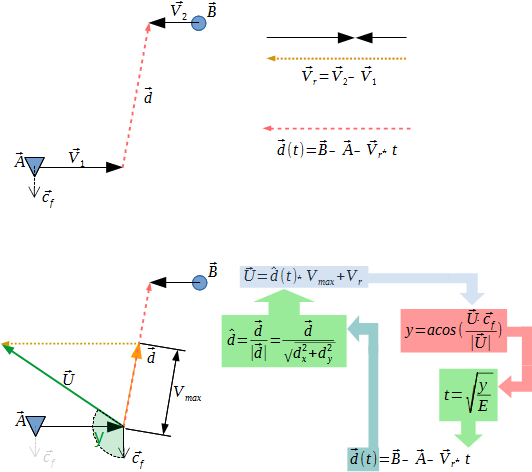 From that we can compute the burn vector "U", that we need to align ourselves to in order to travel towards the target at the speed of "Vmax"

The bigger the angle between craft's heading "Cf" and vector "U", the longer it will take the craft to turn. Which means, the craft will cover more distance while turning (uppermost picture). Which means the angle will change during turning etc. etc.

On second picture, in red box. at the top we compute dot product, at the bottom we multiply magnitudes of vectors. As the Cf vector is of length 1 all the time, we can spare it.

The primary thing I'm looking for is variable "t", currently I'm out of ideas.

I've done this before. The easiest method is to simulate the projectile, record points along its trajectory and note the closest point to the target. What I then do is get the target's location + (target velocity * time taken to reach closest point*) to get the location it would be by the time the projectile reached it. All you need to do then is Math.atan2 the new coordinate with your ship's coordinate to get the angle you need to be at to hit it (or you could draw a marker on the HUD at the new location if you prefer).

For my purposes, this is efficient enough, and can deal with multiple targets at once without any performance hits. If you want it to be more efficient, simply multiply the projectile's velocity and put less points along its trajectory.

*note that the time taken to reach the closest point is that point's index in the array.

Edit: As requested, below is a rough pseudo-code for what I did, note that the way I simulate my projectile will probably be different to how you have to simulate yours.

Also note that the functions below belong to the ship and 'this' is a reference to the ship instance. Also, this is some kind of modified java :P

6
How to calculate the exit speed of ball bouncing off a solid surface
2
How to calculate continuous motion with angular velocity in 2d
3
2D Smooth Turning in a Tile-Based Game
2
How can I determine trajectory from distance and time, without initial velocity?
1
Vector magnitude in orientation
1
Unity Vector3.Angle() direction
0
Obtaining vector representing local z axis orientation