Best way to handle cornering in a 2D maze game?

I want to implement smooth cornering in a grid, much like Pacman moving in his maze. A big difference with Pacman, my characters can stop- thus the player has to keep pressing the controls to keep moving.

I also want the speed of the character to be variable (depending on various game mechanics). Now this felt like a simple mechanic to code, however it's giving me more trouble than I expected. The code only works properly if the character aligns exactly with the tiles.

The green character moves down and the player want to enter the corridor on the right. However the character doesn't align properly thus the collision prevents it from moving. 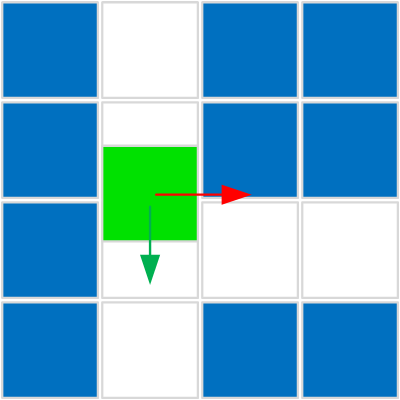 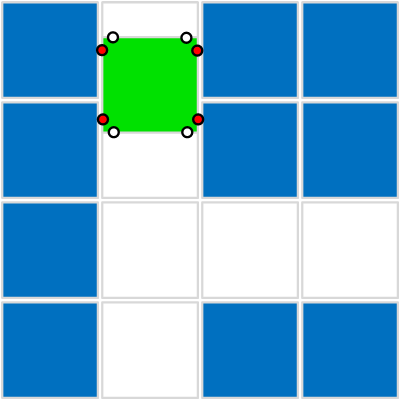 It also keeps the character nicely aligned to the grid. All seemed fine until this happened: 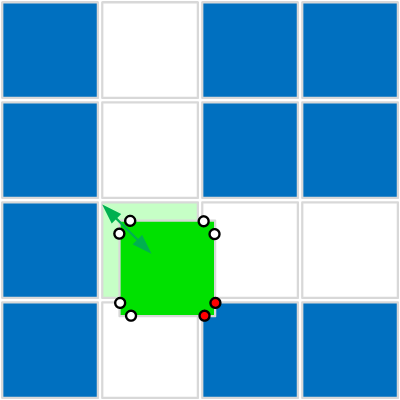 The character keeps bouncing back and forth as the collision code pushed the character out of the colliding boundaries.

I feel my code is getting more complex than needed. I googled to check various pacman implementations, but most I found deal with fixed speeds and rely on the fact that pacman keeps moving.

So what is the best way to deal with navigating a gridlike maze with variable speeds?

For each collision point I check the tile in it's path (to prevent bullet through paper- while my character won't go as fast- I might get projectiles in the game later).

Line is Bresenham on my tilemap to return the nearest tile in the collision path. Then depending on the location of the collisionpoint:

Can the grid movement be done simpeler? What am I missing ...

EDIT, based on solution:

I ended up using VaTTeRGeR suggestion. I have the character move from tile center to tilecenter and make decisions based on the options whenever the character crosses a tilecenter.

The helper functions do some minor calculations where the axis (X,Y) and relation to direction are relevant.

If the player wants to go around a corner/change direction, check if the distance he will be able to move in this tick (speed*delta, GREEN ARROW) is bigger than the distance from his center LEFT BLUE DOT to the connecting blocks center ORANGE RECTANGLE.

If true: move him to the center of the connection-block ORANGE RECTANGLE and then move him the remaining distance (speed*delta minus former distance to center) in the direction he wants to turn. This moves him along the RED ARROW to the position the RIGHT BLUE DOT is at. Do all this in one tick.

if not: just move him forward. 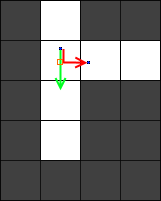 I would look at the problem differently: I would use navigation graph instead. I would "bend" the original navigation graph to your problem - each junction is a node(with 0 radius), and each edge stores its length and its direction. Player navigate on graph instead of in a world full of solid walls. Player can move each frame at desired speed along edge he is on if either "correct" direction button is pressed (note this could be generalize to support 8 or more directions). Another benefit is that generating such graph is trivial for uniform grid (any flood-type algorithm will do). 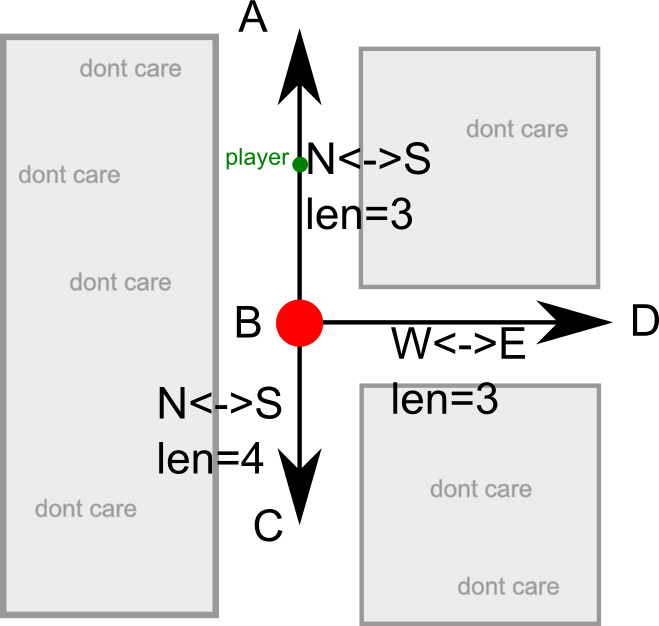 Whenever player would at his current speed cross a junction there is decision to be made which way he will be moved. You have many possibilities what logic choose here, first one to come to mind is pick the last held(=last pressed, still down) button direction. You could implement this for example by storing keydown(up) events on a stack.
In your original image, if player was on edge between nodes A and B, 1.1 units from B and moved 1.6 units in direction of B, decision would be made(trivial check 1.1 < 1.6). If he held button S first(for moving down) and "short" before junction pressed button D, he would cross the junction, turning right and continued (remaining 0.5 units) on edge from B to D.

Not the answer you're looking for? Browse other questions tagged c# collision-detection tilemap grid cornering or ask your own question.

5
How do I resolve a collision of a rectangle with two rectangular tiles at once?
2
Collision checking problem on a Tiled map
3
Pixel Perfect Collision Detection in Cocos2dx
0
2D Tile Collision free movement
4
Wall detection in maze game - On the fly or precomputed?
0
XNA Platformer - Where should tile collision handling be?
0
How to make an object move outside the map and appear on the other side with a tilemap?
0
2D collision detection for a block game
1
Tile-based board game collision mechanism algorithm