I have a player game-object with a script Player. In the Player script I have a public properties weapons.

I want to have to just drag in this properties a script/prefabs. And the Player script must can get the properties of the weapons selected.

For example: imagine, we have two weapons, one is a pistol with 5 attack power, the other is a knife with 7 attack power.

Now I want to set pistol in the Player script.

What should I drag here ? A game-object with a weapon script ? Or a weapons script who instantiate a weapon ? Or maybe an another solution ...

The idea is to be able to create easily some weapons without scripting more. Just place a sprite, and modify some properties.

You can always just stuff all weapons in one big list and access them with an index. 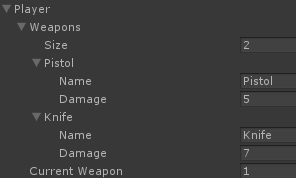 Not the answer you're looking for? Browse other questions tagged c# 2d unity or ask your own question.

2
Are prefabs the only way to dynamically build a world in Unity?
3
How should I set up 2D animations for weapons in Unity?
24
How can I avoid tight script coupling in Unity?
2
Unity: How to manage a large amount of prefab variations?
1
Correct architecture for weapon class in RPG
0
How to do camera follow without drag and drop in Inspector in Unity?
0
How to store an array of prefabs together with configuration parameters