How to resolve collisions when using ray-casting to predict the location of future collisions?

I ran into a question I can't seem to solve, while implementing the movement/ collision checking code for my game. The game is in 2D and all objects in my game use either AABBs or circles as collision masks. My current procedure for moving a game object uses the following steps:

Below is a screenshot of the collision detection. It casts the object's AABB (bottom-left blue rectangle) along the motion vector (red line) and finds the points where the AABB would enter and exit the other object's AABB (big blue rectangle). It returns me the position, normal and lambda (progression [0.0, 1.0] along the motion vector when entering/ exiting the other object). 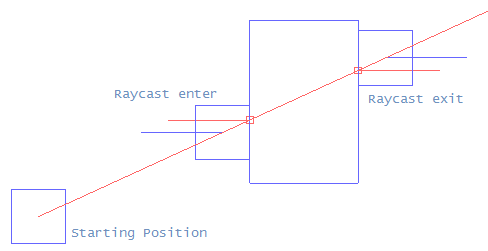 My problem is the collision resolution step. The problem is that my objects get stuck in eachother using the current procedure. The reason being that the raycast procedure returns the position where the object "just collides" with the other object. Because of this, on the next update of my game world, the object is already colliding before it even moves. When I perform my collision detection step, the results is that the "first collision" occurs at the starting position of the object.

I've been reading related questions here, but haven't found a definitive answer yet. Here are some of the things I've read and problems I found with them (from "bad" to "better"):

In short: Where do I move my object, if I know exactly where the first collision would occur, without getting it stuck in other object?

There are two steps to solving this problem.

First you need some extra data on collision. When two objects collide you want to know how far they've collided into each other.

After that you want to move the two objects backwards. Depending on how accurate you want it you could just take the amount that they overlap, divide it in half and then just move each object back by that amount (not good if only one object is moving obviously). If you want to be more accurate you can try to determine how fast each object was going on impact and move them apart depending on which one was going faster.

After you've separated the two objects from colliding you can apply your resultant forces. Again if you don't need to be SUPER accurate you can end here and just let further collisions sort themselves out.

A way to increase the accuracy of your collision response here is to iterate this process. Each object will detect and react to collisions multiple times per frame so that if one collision results in another immediate collision you can account for it. You want to put a limit on this so that you don't end up with an infinite loop of collision detection. Objects that are more important will have higher iteration limits.

There are a few different algorithms to determine object overlapping that can be done as apart of the collision detection step. If you use the Separating Axis Theorem (SAT) you can do this pretty easily but that's more for 3D. It's even easier to do it with circles and AABBs in 2D.

Here's a quick example to get the overlap for two circles colliding: