I'm trying to implement some sort of faux space physics in my 2D game. I have a top down view of my space ship. You can change direction and set a speed up to a maximum which then accelerates the ship in that direction according to the ship's engine acceleration amount.

I have code working fine with getting the ship to slowly start moving in that direction and increase speed up until the max speed is met.

While the answers have been slightly helpful, it's not getting me to my final solution. I cannot seem to transform the theories into working code. Here are some more parameters:

The problem I'm having is when I change direction. If I'm travelling in one heading at 300 speed, then change the heading to the opposite, I'm now instantly travelling at the set speed instead of slowing down, and getting back up to that speed in that direction. 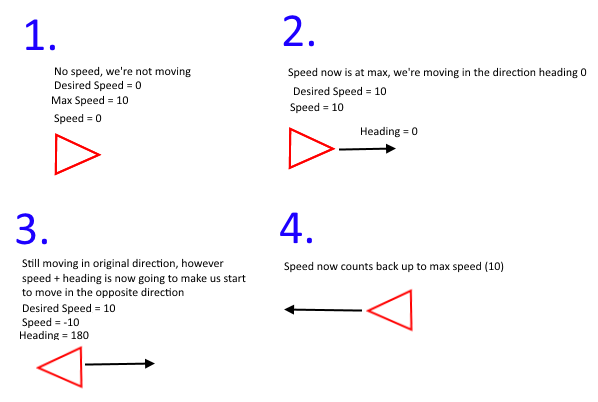 I'm not familiar with xna... but I know maths. And implementing physics without understanding the math behind it is like going into politics without knowing how to lie. So let's get started!

First of all, your way of moving the ship around isn't really physics based. You don't want the player to change the position of the ship directly. What you want to do is let the player apply acceleration to the ship, then let the physics calculate the ship's velocity, then let the world change the ship's position by that newly calculated velocity. Velocity is the difference in the position of the ship in time. If it moved 5 units right and 1 unit up, it moved by velocity of (5,-1). Acceleration is the difference in velocity of the ship - it only influences the ship's position by changing its velocity. If your ship was going 2 units to the left and 1 unit down, meaning the velocity of (2,1), and the player accelerates it in the opposite direction, meaning (-2,-1)), it'll stop in place with the next unit of time (be it frame or tick or whatever). In other words, you need to add acceleration vector to the velocity vector and then calculate where the ship will be next.

Imagine an arrow that starts somewhere (origin), points to somewhere (direction) and has a certain length (magnitude). Now describe it with two values - how much X and how much Y is its end from its start. For simplification I'll only talk about X axis which means your vectors point at something that is "that much X" to the right (positive) or to the left (negative).

Now, how the ship's position should change between frames? With velocity vector. Let's assume your ship starts at location (0,0) with velocity (12,0). It means it will change it's position as follows:

How do we change the direction? You don't want to just change the velocity to (-12,0). That'd mean the ship goes from 100 parsecs right to 100 parsecs left in one "frame". I wouldn't want to be on that ship when it happens. Again, the "length" of the vector is called "magnitude" and in case of velocity it happens to be speed. So you want the magnitude of velocity (ship's speed) to slowly decrease to 0 and then to accelerate to negative 12 (which means it moves in the opposite direction). You can do so by adding acceleration to the velocity, e.g. the acceleration of (-4,0), so now the ship moves as follows (player pressed left on a 3rd "frame" then released it on a 9th):

So you want to apply an acceleration of (4,0) to make the ship gradually gain speed in a positive X direction when the player presses the right arrow and apply an acceleration of (-4,0) when left arrow is pressed. Obviously when no keys are pressed you don't apply any acceleration meaning the ship is keeping it's velocity (moving at constant speed in given direction). If you want it to slow down gradually when no key is pressed, add another vector, call it Drag and give it direction always opposite to velocity (i.e. towards the back of the ship) until the magnitude of velocity reaches 0. Hopefully you get the idea.

What I would do (pseudo code, you'll have to fix it, add encapsulation, etc., also it ignores some aspects, e.g. going diagonal is slightly faster than straight left, right, up or down):

In order to do this you need to simulate inertia. This is how I would recommend doing it:

Ok it's actually really simple to achieve. First of all as u mentioned, ur engine direction describes the path of movement. This makes it comfortable to work with.

First of all, always store a vector of the direction ur moving.

Next u must have a vector of the lookat of ur engine.

So for now when u start moving, let's say right, the both the direction and lookat of engine vector are pointing to the right. When u now want to turn let.s say to top (90 degree), then u simply turn the lookat engine vector.

Now comes the fun part. Determine with any function how strong to effect the change of direction and break.

first of the direction change.

Depending on ur Speed and change of angle u could slow down and turn the direction vector.

If u want a complete direction change (180 degree), then it's simple math. In ur update just change ur speed slowly. When speed turns to zero, flip the direction vector for 180 degree and start adding speed again.

On a 90 degree turn, it get's a bit more complicated. u need to define a function to calculate how much the ship is allowed to turn according to speed and if it gonna slow down how much. But u can play with the values till it fits what u want.

Not the answer you're looking for? Browse other questions tagged xna c# physics monogame or ask your own question.

0
Ship Controls modeling Real life Physics
2
How should I implement basic spaceship physics?
5
Spaceship acceleration for following waypoints
0
Problem with sprite direction and rotation
7
Path following with Asteroids-like movement. Time to complete path
0
XNA - Efficient way to get pixel color from rendertarget2D
1
How to completely stop the camera from clipping into the ground
0
Moving ship to new destination when already having a velocity?