We are developing a game in Unity 4.6.6 for both Android and iOS.

Currently I am building the game UI with the new Unity UI system. In particular I am building a button list to create kind of inventory slots using the Grid Layout.

I have noticed that my draw call count is increasing considerably despite having my UI in an atlas (using Sprite packer) and using the same font all over the UI. After some tests I noticed that one draw call is generated per each UI Text and UI image present in the scene composing each button when using a Grid Layout Group, when the Grid Layout is not used the draw calls are reduced noticeably. 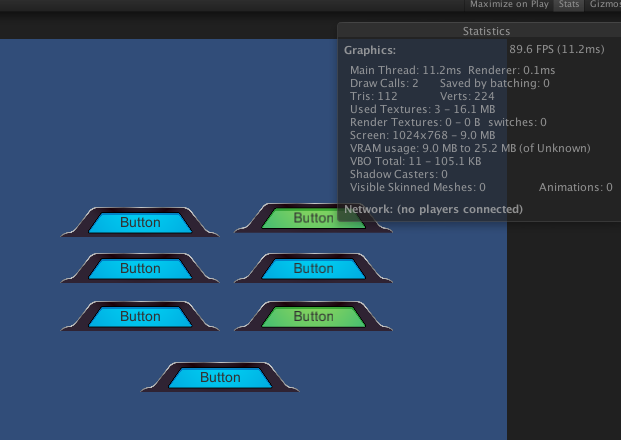 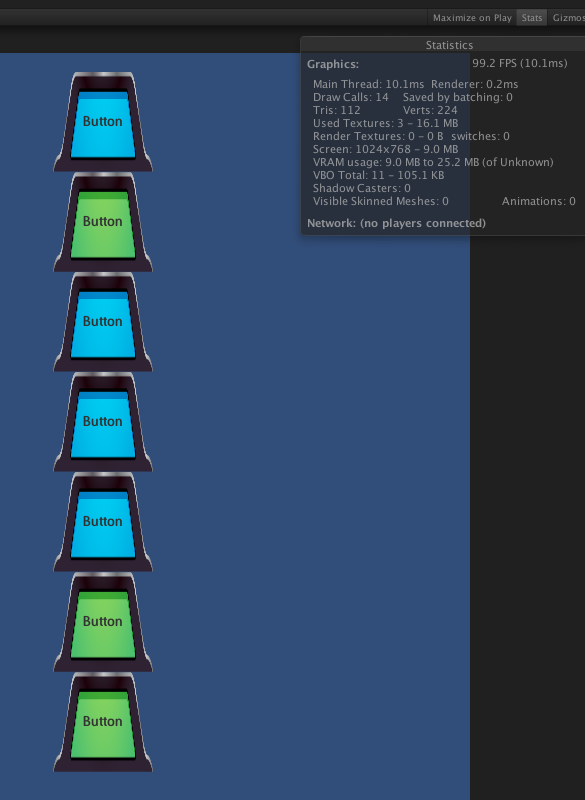 I have no idea if it is possible to reduce the number of draw calls when using the Grid Layouts.

Without code to reference the only thing I can assume is that the grid is adding another object to each button. Each button is one call, so 7, and the only reasonable assumption is that the layout is adding an additional call to each, now totaling 14.

From what it looks like, you're forcing height and width bounds and spacing is either assigned or being split between them all. 2 passes on each button versus whatever you where using in the first screenshot.

Not the answer you're looking for? Browse other questions tagged unity gui optimization .

2
Unity3D draw call optimization : static batching VS manually draw mesh with MaterialPropertyBlock
0
In Unity3D, what ways can I improve the batching with a single texture atlas and four-point material?
0
Public variable changed in script isn't stored in playmode
1
Select a button without calling click
0
Draw animating grid with terrain deformation and variable colors
0
In Unity how do I easily snap modular building pieces to the grid without overlaps or gaps?
0
UI detects different resolution after second app launch