Rotate a rigid body not around its centre of mass

I have a rigid body (a boat) whose centre of mass is towards the front of the object. However, this makes the rotation look strange as the rudder that is turning the object is at the back of the boat so the rotation would be around that point.

How can I rotate the object from the a separate point (using forces) without changing the centre of mass?

This would suggest using constraints but I can't figure out how that would work. You sort of need the rotation point to act as a hinge, but when I apply a suitable constraint, but that would just block the rotation rather than convert it into a rotation around the new point.

I want to resolve this using physics driven operations in Unreal Engine 4.

I don't want to move the Centre of Mass, admittedly for not a particularly good reason, but this still feels like a valid question even if that was an option - what if you want to rotate around two different points.

All free rigid bodies will rotate about their center of mass, so you're kind of stuck in that regard. However there are two options: 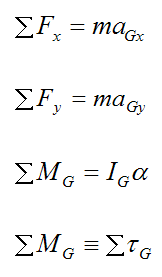 Either way, once you sum your moments about the pivot, simply divide by the moment of inertia to obtain an angular acceleration (which is only valid for rotating about the pivot). More on rigid body dynamics

Not the answer you're looking for? Browse other questions tagged physics unreal-4 .