How to use world coordinates

I am quite new to game development (but not programming) so please forgive me if I am not correctly understanding certain concepts.

I am trying to figure out how to use world coordinates rather than pixel coordinates so that my game can work correctly at different resolutions. As I understand it, I need a viewport and I can use camera functions such as project() and unproject() to convert between the two coordinates. At the moment, I am just placing objects every 16 pixels as this is the size of objects and the objects cannot intersect. 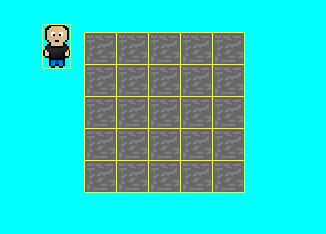 Basically, I'm asking how to set this up and have it work properly as world coordinates.

Here's what I would do in this situation.I'm not using libgdx myself, but I'll give you some pseudo pseudo code. If you haven't already, make a separate class called something like TileMap In that class, create the following variables.

The map variable is a two dimensional integer array, meaning that every tile type will be represented as an int. For example, a stone tile could be '3'

Now you've got a TileMap setup, currently all the tiles should be 0 to my understanding, if they aren't you might have to make a nested for loop for the tilesX and tilesY variables. It's time to create the methods that will return the world position from given tile coordinates, and the method that will return a tile from the given world coordinates. To convert to world position, simply take the X and Y values and multiply them by the tileSize this will give you 0,0 at the tile 0,0 and 48,48 at the tile 2,2 assuming you have tileSize set to 24 You can create a method that returns this easily.

Now that you've got a TileMap class, you need to instantiate it in your main class. To do this, simply write

And to use the methods you created in the TileMap class, write

I've written all of this on my phone, so I haven't had any way to test my code, and syntax might not be perfect. But hopefully this will give you an idea on how to do this.

if I'm missing anything feel free to ask questions.

I hope this can help you achieve what you want :)

You are allready on the right path, Viewport and Camera are what you are looking for.
If you take a look at the different Viewporttypes, there are some, which support virtual screen sizes. That means, that you can say how big your Viewport is and Libgdx will "scale" it up to the Game-Window (or to the screen, if fullscreen).
So when creating a Viewport, all you have to think about is, how many units i want to see on screen at one time.
If you, for example, have a human-like character (about 2m tall), and you want him to use 1/10 of the screen-height, the your virtual screen height would be 20 (character-height/screen-height = 1/10).
Also think about the aspect ratio. Most PCs nowadays have a 16/9 aspect ratio, while mobile devices might have different aspect ratios.
There are different Viewport-types, with different solutions to this: - FitViewport keeps aspect ratio, by showing black borders on the sides or on top and bottom, if aspect ratio is different.
- StretchViewport stretches the frame to use up the whole screen, no black borders will be shown.

There might be other Viewport types with different solutions for this, but i guess those are the most important types.

The Camera instead is used to show different parts of the world, you can simply move it arround using world units.

And as you allready said, you can convert pixels to worldunits and vice versa, by using viewport.project and viewport.unproject. This is used for touchinputs for example, as they are given in screen coordinates.

4
How to make an infinite map
0
How to only render whats on screen (Tilemap, Java2D)