I am trying a box2d body to rotate following the mouse. Here's an image to clarify what I mean. 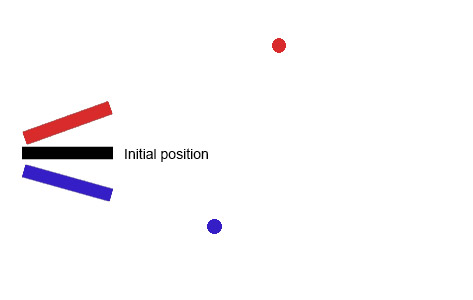 The red and blue circles are current point of the mouse and the body (of corresponding color) moving/rotating to follow it. Basically the rectangle should rotate with its one end pointed towards where the mouse pointer is.

Here's my code so far,

And here's a gif of how it appears now.

as you can see the body gets skewed and also doesn't rotate properly. What am I missing?

The skewing is because of how the viewport is setup, try changing it to something like this;

Also, the rotation is wrong because you're trying to use screen coordinates, you need to unporject them from screen space into camera space;

As a side note, be careful about rotating bodies like this, setTransform on Body is intended for body setup, not during the simulation and I think you might run into some interesting behavior when this body collides with other bodies.

Not the answer you're looking for? Browse other questions tagged physics libgdx box2d .

0
Maintain speed in box2D body
1
Box2D body jitters when colliding with static body
0
Box2d making a body follow the mouse accurately
0
How to move a Box2D body towards a mouse click?
1
Implimenting BADLAND like Body Movement in Box2d
1
How to set a box2d body to follow a strict path
3
How to completely stop the camera from clipping into the ground