I am struggling with how to implement a melee weapon that can swing when a key is pressed.

I am imagining two different attacks (stab and swing) 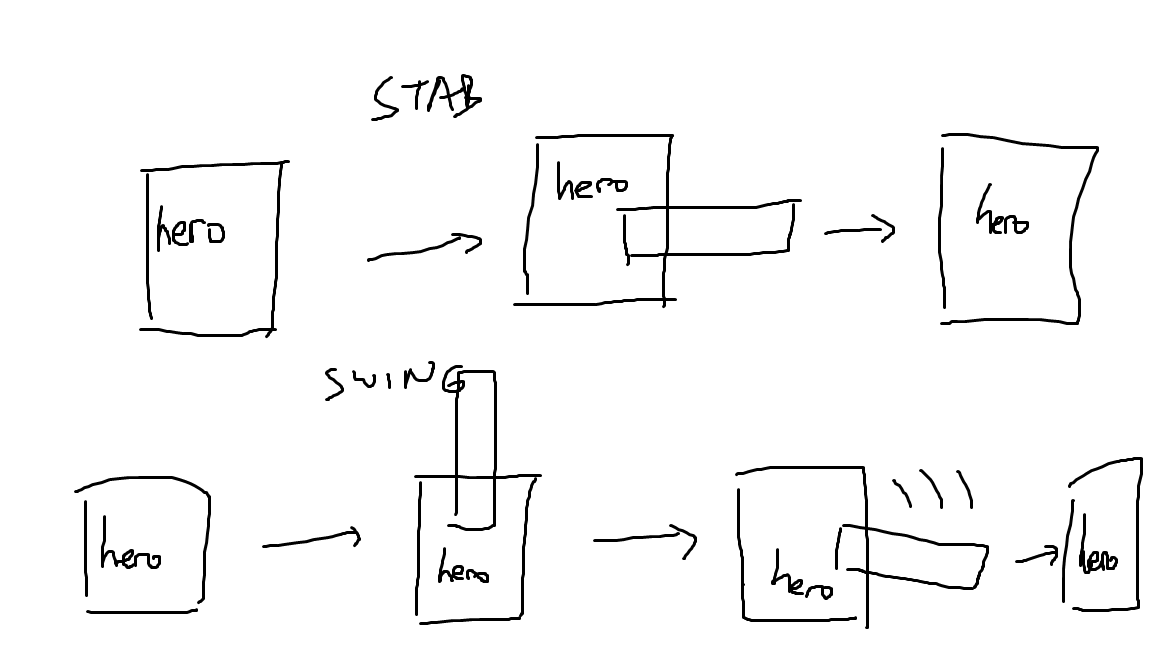 So with the press of a button, a body/fixture (sensor) would come out for ~1 second and then disappear (alternatively, the body/fixture could always be on the hero and just rotate 90 degrees around the vertices when pressed, and then rotate back to normal)

Same thing, but now the weapon will start from the top and swing downwards. Weapon will also be a sensor.

Incidentally, I have done exactly what you are trying to do. The only catch is I was using Jbox2d so the code is in Java, but you should still be able to figure it out if you are using C++

You basically need to use joints/motors and all that fun stuff if you want to do swinging action. Here's a snippet of what my code looks like based on the key input:

And then as far as actually building the arms and whatnot, the snippet looks like this.

I realize there is a lot going on here, but its probably easier if you just ask me what you need clarity on and I explain it. If you have never used any of these things though, you will probably need to do a fair bit of reading.

Realize, Box2d has all of the collision detection and physics built clean into its libraries. Take it on faith when I say, it is easier to figure out their system than try and do things from scratch. If you want collision, you use fixtures bodydefs, if you want them to rotate or move, you use joints. It may seem a little more complicated at first, but in the end it saves you infinitely more time to use their methods.

In fact, I would suggest that you probably will never finish if you try and do things from scratch, assuming you are creating a physics game. Because computing things like friction, buoyancy and not to mention, /efficient/ collision detection, is going to take you a lifetime.

I have found some sort of a workaround this, but I am not sure if this is a good way to code.

When a key is pressed, I set the angular velocity to 10 and then at every update, I ask it to check

From what you are saying, it seems like you could also have to simply move the code that resets the angular velocity after a certain angle is reached. I suspect that this code is only used when the button is pressed, since you say pressing the button a second time makes the movement stop (and thus makes the testing code work).

If this is the case, you could move it to an 'else' statement after the code that tests if the key is pressed.

One thing that you could do is on command, run a method that would create a body relative to the position of the main body using body.getPosition.set(); set the filter bits to not collide, then set the linear velocity or apply force, whatever you want to move it forward after starting a timer to destroy after x amount of game loops

Or you could do the same thing but instead creating a distance joint combined with a prismatic joint only along the x axis to make a sudden shove out motion with collide connected to be false so that it doesn't collide with the main body this option would probably work better,

for a swing attack create a similar body rotated half of pi with only the tip of the sword connected to the main body with collide connected to equal false of course, then you could apply motor force on the joint an angular impulse on to the sword body destroying it after a set rotation of the body is achieved or a certain time has occurred,

if any extra assistance is needed, just comment below

Not the answer you're looking for? Browse other questions tagged java libgdx box2d .