Can we create same name class for different objects in unity?

I have four similar objects in my game. As they are all similar therefore I have created a single script that defines mash for all of them. The script that defines mash for these objects uses a variable called radius which I have imported from other file (by classname.radius). The radius updates on every frame and it is the only property that is different for all objects.

To allow different radius for different objects, What I thought would work was, making four different classes of same name classname. Creating variable radius in all of them and giving them different values. Dragging first file to the first object, second file to second object and so on.. When executed, every time the script that generated mash considers classname.radius from the file which is dragged to that object. But that isn't working. What is wrong and how can I implement it?

You only need one class with one non static public member 'radius' (static variables wont work...)
Just create several instances of this class and connect them to correct meshes. You can have an empty gameObject to hold those instances, then drag and drag them to connect them to your other script on your meshes.

There are other ways to implement this though, but all require you to create class instances...

The script that defines mash for these objects uses a variable called radius which I have imported from other file (by classname.radius).

So this means your variable radius is static? But since you want it to be different for every instance of your object, why do you have it as a static variable? Why not just make the variable not tied to the class, but to the instance of the class. 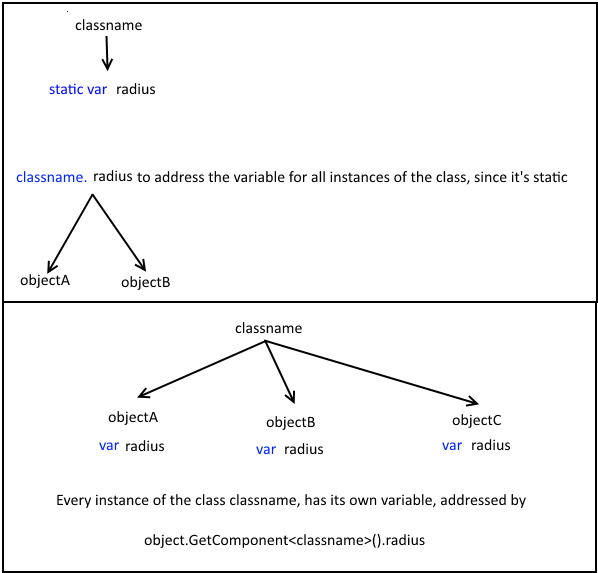 8
How can I prevent rigid bodies from moving through each other using Unity's built-in physics?
24
How can I avoid tight script coupling in Unity?
1
Instantiation taking too long?
1
Unity3D Tag as a public variable in editor
1
How can I pool objects with differing properties?
1
Why don't my generated instances update when I change their prefab?
0
Most effective way to perform dynamic list of actions?
0
Instantiate unity sometimes lags the game some times it doesnt
0
How can I evaluate varying conditions in a Scriptable Object?