I have a collision system (in 3D but for the purpose of the question assume 2D) where I want to calculate the new velocity (stored as a vector) after a collision.

What I have is the velocity of the object colliding against a plane and I want the object to then slide down that plane.

I know the angle of impact with the plane and I know the normal of the plane. I can create a Rotation Matrix for the rotation that the velocity needs to be changed by, I just am not sure how I rotate the velocity vector by that matrix.

I'm sure it's an easy answer but I haven't quite been able to get it.

I added a picture as requested 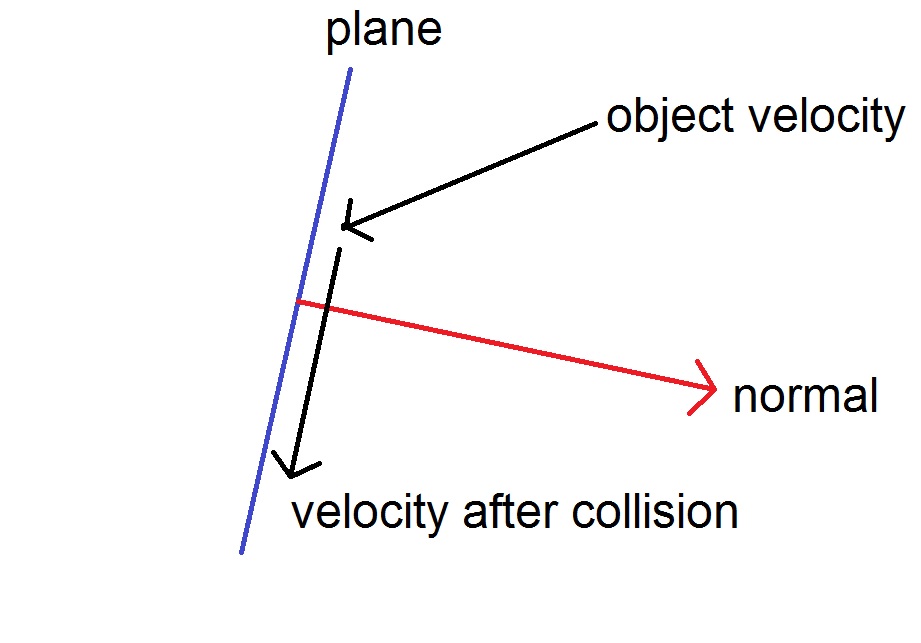 Any help would be appreciated.

You don't need to rotate the velocity at all.

But just in case you REALLY want to know how to transform a vector by a matrix, then just read this: http://blog.wolfire.com/2010/07/Linear-algebra-for-game-developers-part-3

Not the answer you're looking for? Browse other questions tagged mathematics matrix vector transformation .

16
How can I rotate about an arbitrary point in 3D (instead of the origin)?
1
Billboarding + aligning with velocity direction
16
How to rotate an object around world aligned axes?
12
Rotate object around fixed axis
1
How much to roll Z to make horizon level
0
Calculating a matrix to have the model follow terrain
0
Rotating plane to face object while rotating around z axis. C++
0
Can't set object's local rotation like rotating from gizmo in the scene
0
Unreal: Get horizontal angle of velocity-looking direction