How to rotate an object along its trajectory path?

I have a missile launcher that uses initial velocity for the trajectory. I edit the launch angle from the editor, and then the script calculates the initial velocity required to land the missile to the target location. The inputs for the calculation are

In this scenario, the target and the launcher position has the same Y coordinates. I simply instantiate the missile prefab and set its initial rotation to match the firing angle (initial X rotation), rotate it to face the target position (corrected Y rotation), calculate the initial velocity using local space (calculate the Y and Z component of initial velocity), and then set its velocity so the trajectory is handled by the physics engine.

The missile lands its target just fine, however, the X rotation of the projectile during the trajectory doesn't change. 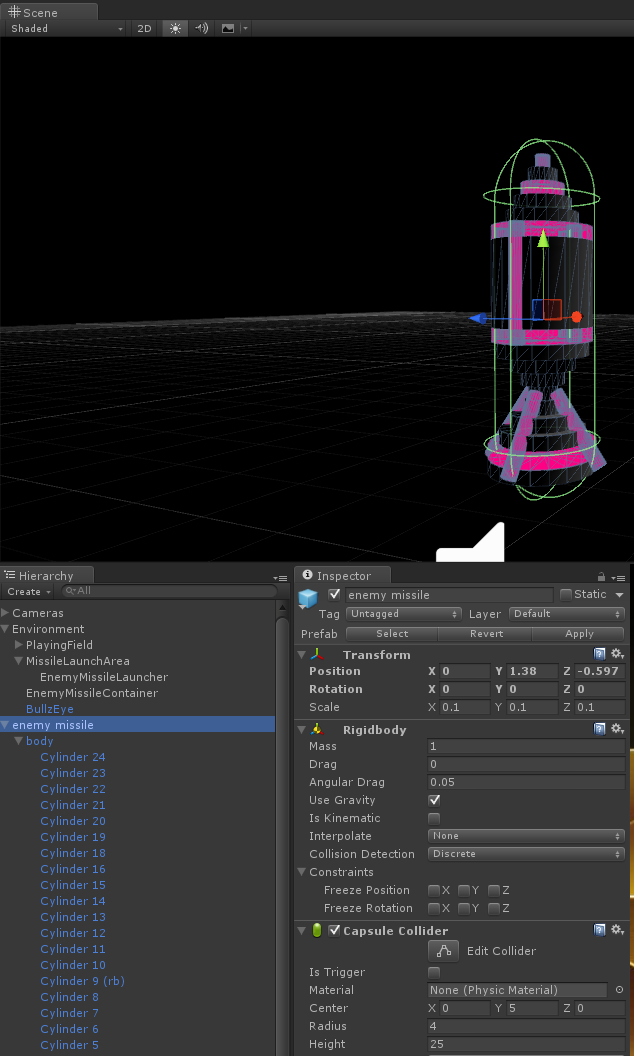 I want the missile to be rotated by the physics engine, or put another way, I want it to look natural while in motion. As you may have noticed from the first image, I have visited numerous unity forums to solve the issue. I tried updating the rotation of the missile on each frame as follows

However, this results in a funny trajectory -- imagine an erect missile tilted a little backward, and at the time of landing, the missile is tilted a little forward. I'm not sure why, but when I try to edit the X rotation of the missile mid air when I use the LookRotation(rb.velocity) while the game is paused, the Z value of the rotation also changes. Since the velocity is a Vector3 with non-zero X,Y and Z components, I think the missile is subject to Gimbal Lock.

What are my options to make it look like a trajectory of a badminton ball?

Can I achieve this by adding rigidbodies to the parts that are at the top of the missile and adjust their mass so that the physics engine handles the trajectory rotation as it is a badminton ball, instead of me messing up with the rotation by scripting? If yes, how can I do that exactly?

The answer lies here. Physics engine actually successfully simulates the trajectory rotation of the object in relation with its rigidbodies velocity when you use LookRotation() in the objects Update() function. The only issue here is the rotation of the prefab. If you rotate the prefab's first child (body, in your case) by 90 degrees on X axis, you'll achieve the natural missile trajectory look.

Not the answer you're looking for? Browse other questions tagged unity physics rotation trajectory .

3
Throwing a ball and estimating its path using a Physics engine
1
How do you convert angle with velocity to x velocity and y velocity?
1
Find Initial Velocity for Parabolic Arc with Fixed Angle that Crosses Target Position
0
Required initial velocity (fixed launch angle) for projectile to hit a target
0
How to randomly calculate the necessary velocity changes to reach a x,y,z target?
0
Strange problem with rotation missile | unity3d - c#
2
How to make mouse pointer be the vertex of a drawn parabola when estimating the trajectory of a projectile?