I'm looking for this kind of effect MINUS the lights and snow (Another problem).

Now I'm pretty new to shaders (learnt them yesterday in my spare time) but so far I have achieved: 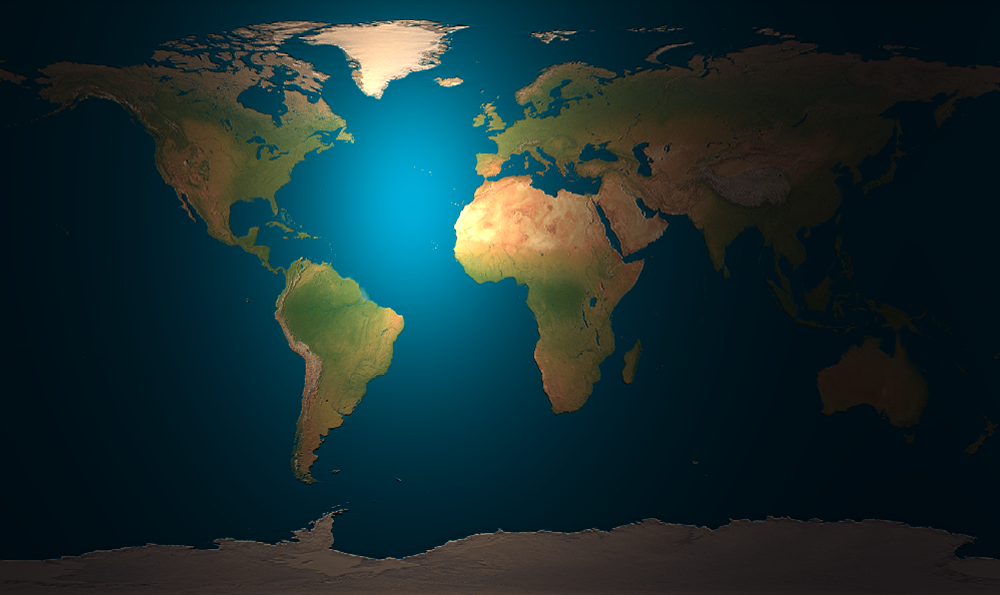 This moves across the screen display light on both sides.

Now I'm completely lost, as to how I can make it seem like a light map I.E. it needs to be more square/sharper (As it's going off the edges) & have the bottom and top times of year.. I though maybe I could pass sphere mesh to the vertex? Or do something with the map-normal. Or maybe use blending with two textures but I've looked around and it looks extremely difficult.

Code I have so far:

What you need is to retroproject the point on your map, from the inverse Mercator into 3d space, then place the sun as a directional light (not point like your image shows), and adjust the point for earth tilting (according to earth-sun rotation plane), then you can evaluate the light.

It will automatically give you the weird valley shape that we see in airplanes navigation screen, and the little gif you point to.

You don't need to actually have 3d data. but you need to do 3d calculations in the shader. This is going to be a bit tad hard to debug because the 3d elements you will manipulate never have a visual representation. So the only way is to get the math right by trial error.

You could only avoid going to 3d space by writing the formulas created by the steps described above, and compacting the whole sequence in just one formula. It would have the same effect, but it needs harder algorithm planning (e.g. on paper).

I did it for you

You can put this in rendermonkey if you want to try. I used the GL2, screenspace samples, "nightsky" effect as a base.
The code in its current state is giving a wave of black and white, I'm not sure about the degree of correctness but it seems to look quite reasonable.
You notice I didn't use inverse mercator, but inverse cylindrical, because from the look of your earth texture, Greenland is quite compressed so it must be a cylindrical projection and not mercator.

Not the answer you're looking for? Browse other questions tagged shaders glsl c fragment-shader or ask your own question.

0
Formula for replicating glTexGen in OpenGL ES 2.0 GLSL
2
Bump mapping Problem GLSL
0
HLSL postprocessing for day to night (DTN)
2
GLSL - skewed parallax occlusion mapping
0
How to create a depth-recording shader for shadow mapping?
1
Day/Night cycle with GLSL - blend from one colour to another along Sin curve
1
mapping texture uvs to sphere for skybox