Got a procedurally generated world. It's succinctly described as an undirected acyclic graph where vertices are junctions and edges weights/length note the amount of time/effort guesstimated to be needed by the current player to traverse between vertices.

Now, the thing is that I'm not a big fan of permadeath as a feature to be forced on the player. It is a great thing for gamers that enjoy the added challenge but a deterrent to casual players. So now I'd like to add checkpoints evenly distributed across an existing game world.

My rule is that I don't want any spot (vertex) on the map to be more than T distance away from the nearest checkpoint with the added constraint that I want the smallest number k of checkpoints possible. 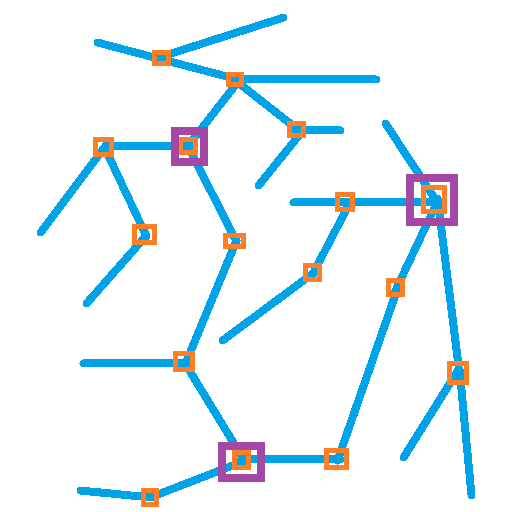 So brute force is not going to work cause the real graph has thousands of vertices. Now I'm wondering if there is a heuristic that can get a pretty good equivalent of the optimal result. Given k or T, I'd like to find the best setup.

mathematics graph
Share
Improve this question
asked May 20 '15 at 19:15

Looking at your image gives an idea of how this should work. Two points are apparent:

So... I would suggest a weight-based approach (this is a very rough answer as I'm pressed for time): assign a value of 1 to all end nodes. Walk "inward" from the end node. Now for the node you have walked to, look at all of it's neighbours that have already had a value assigned (at the start, just 1's) and make this node's value the sum of all of those. Repeat and continue. At each step, check whether you have met or exceeded T; if you have, cap the value at T (i.e. never allow any node's value to exceed T). As you get to intersections like the top left one marked in purple, you should start to get rather high values (if your graph is to be taken as a working result, then these would already have met or exceeded the value of T). Iterating further, ultimately those nodes directly between the purple nodes (four of them) will also be T. Thus your resultant graph is the purple intersections A & B, the two nodes between them, and B & C and the 2 nodes between those, or a linear graph of 7 nodes. This is a kind of "straight skeleton" or "watershed" as it is known in computational geometry or GIS, respectively. You are quite literally creating a watershed network out of the graph, that is, those edges closer in to the centre of the (mountain) network are highest up, whilst outlying ridges sit at a minimal height of 1 (sea level).

At this point, I suspect that selecting nodes off this skeleton in order to provide the best-spaced checkpoints should be a reasonably trivial exercise. Thousands of nodes or not (though hopefully down to hundreds by this point), graph operations are by their nature iterative and so the best you can do is O(n) in the number of nodes.

Of course the "skeleton" will not always be "straight", it may indeed branch. And that is as it should be if you want a workable solution for your game.**

EDIT I missed your comment about distance being computer by sum of edge lengths. You can factor this into the above calculation: Endpoint nodes must then be represented as zero (which is the distance from edge) while inner node weights are distance to nearest endpoint.

There are two questions here:

Question 1 turns out to have a linear-time solution:

First, fix some root node arbitrarily. If this is a level, then some start/spawn point makes a natural choice. Next we define...

I've shown a recursive version, but this can also be done in one linear scan by first sorting the nodes in topological order (depending on how you generate your graph, they might already be in such an order)

The trick is that this doesn't necessarily solve question 2, of spreading out the checkpoints equally. It puts off adding a checkpoint for as long as it can, which tends to pull all the checkpoints as close to the root as they can go. So some checkpoints may be arbitrarily close together, and intermediate nodes may be within T range of multiple checkpoints, even though the set of checkpoints is still minimal.

If this is a problem, there may be a post-process we can apply, given a minimal checkpoint set, to jiggle those checkpoints around the topology to a more even spacing.

Assuming we wish to have N checkpoints:

Keep track of placed check points in a listlike structure:

Not the answer you're looking for? Browse other questions tagged mathematics graph or ask your own question.

8
What is a simple algorithm for calculating evenly distributed points on an ellipse?
7
How can I render a circular progress bar procedurally?
22
How can I evenly fan out a hand of cards?
7
Orbiting multiple objects evenly around a changing radius
1
Distribute circles evenly on Screen - circle packing
2
Algorithms for positioning rectangles evenly spaced with unknown connecting lines
4
Convert 2d generated level to graph or analyze
4
Procedurally generated paths with intersections
3
Procedurally generating dungeons using predefined rooms